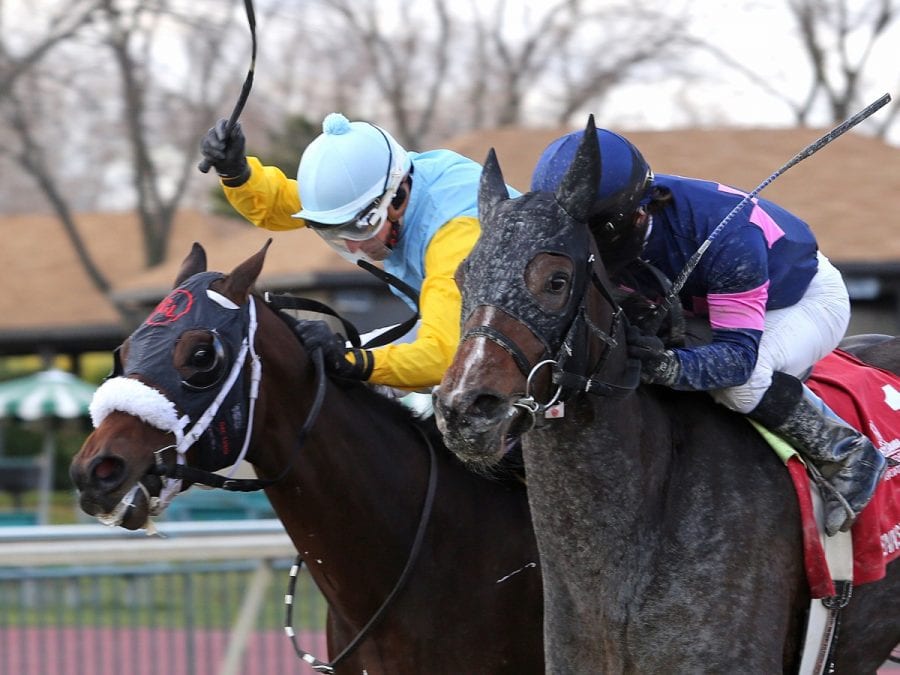 That was better news for the former than for the latter.  Under jockey Andrew Wolfsont, Downhill Racer overcame late traffic trouble to win by a neck over Heat Dome in a modest time of 1:27.04 for seven furlongs.

That gave Downhill Racer two wins from two starts and pushed his career earnings to $79,980.  For Heat Dome, meanwhile, it marked his third runner-up finish in three career races.

After a pair of scratches, it was a lightly accomplished group of five that faced the starter yesterday in Bensalem.  Dennis’ Diamond was the only horse in the event to have made more than two starts and the only one to own two victories, but both of those triumphs had come against claiming company.

Bettors installed William Hedus trainee The Gemini Man as the 1.30-1 favorite.  He had won his lone prior start against maiden claiming rivals, cruising to a three-length score at 14-1 odds while earning a gaudy BRISnet speed figure of 86, the highest last out fig in the field.

Dennis’ Diamond, the longest shot in the field, took the early lead but was supplanted in front by The Gemini Man after a half-mile in 46.95 seconds.  But after going clear, The Gemini Man had no answers late and faded to a well-beaten fourth, ahead of only Dennis’ Diamond.

That gave Heat Dome, the Cal Lynch-trained runner ridden by Frankie Pennington, first jump, and he pounced, grabbing the lead into the stretch.

But Downhill Racer was in hot pursuit.  After being blocked nearing the quarter pole, he angled to the inside for running room and prevailed in a long stretch duel over Heat Dome.  It was another 2 3/4 lengths back to Indominus Rex in third.

Downhill Racer paid $8.40 to win as the third choice and topped an exacta worth $32.

Downhill Racer was bred in Pennsylvania by Mr. and Mrs. Rodman Moorhead, III.  He is by Jump Start out of the stakes-placed Consolidator mare Encore Saritta, and he’s trained by Jonathan Sheppard for Buttonwood Farm.