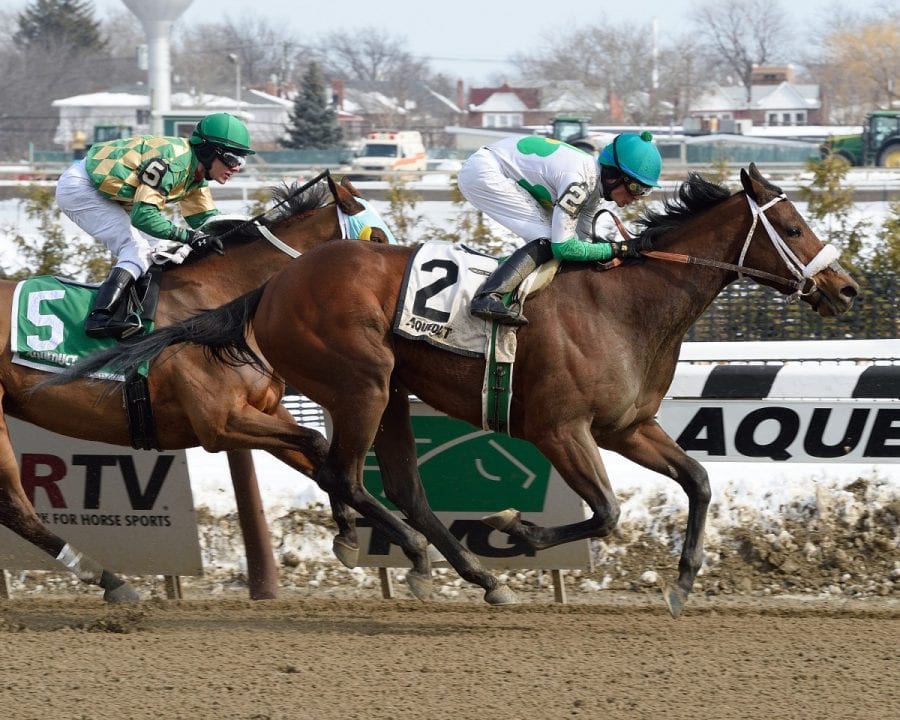 It’s been something of a rough season for Shayjolie.

The five-year-old Indian Charlie mare — off from June 2015 until this past August — has finished fourth or fifth in all three of her starts this season.

She’s looking to find her winning form this afternoon in a $54,000, third-level allowance at Parx Racing and, at 9-5 on the morning  line, is favored to do so.

Shayjolie enjoyed productive seasons in 2014 and 2015, with Gary Contessa training for Sean Shay.  She won three of 15 starts and placed in five others, earning over $372,000 in the process.  Highlights of those years included a pair of placings in graded stakes — second in the 2014 Grade 3 Comely at Aqueduct and third in the Grade 3 Top Flight, also at the Big A — and a win in Aqueduct’s Cat Cay Stakes in March 2015.  That win provided rider Sheldon Russell the 1,000th victory of his career.

Shay sold Shayjolie at the Keeneland November Breeding Stock Sale following that 2015 season for a tidy $400,000.  Speedway Stables signed the ticket.  But Speedway opted to put her back in training in the spring with trainer Christophe Clement, and she made her seasonal debut in early August in Saratoga’s Shine Again Stakes, where she ran fourth behind subsequent Breeders’ Cup Filly and Mare Sprint runner-up Wavell Avenue.

This afternoon, in the seventh at Parx (3:07 post time), she’ll have Jose Ortiz in the irons.  Her major competition in the one-mile test looks to come from Juan Vazquez trainee Queena Esther (7-2); Trace of Grace (4-1), who had a three-race win streak snapped last out in allowance company; and stakes winner Money’soncharlotte (9-2), who like Shayjolie is graded stakes-placed.