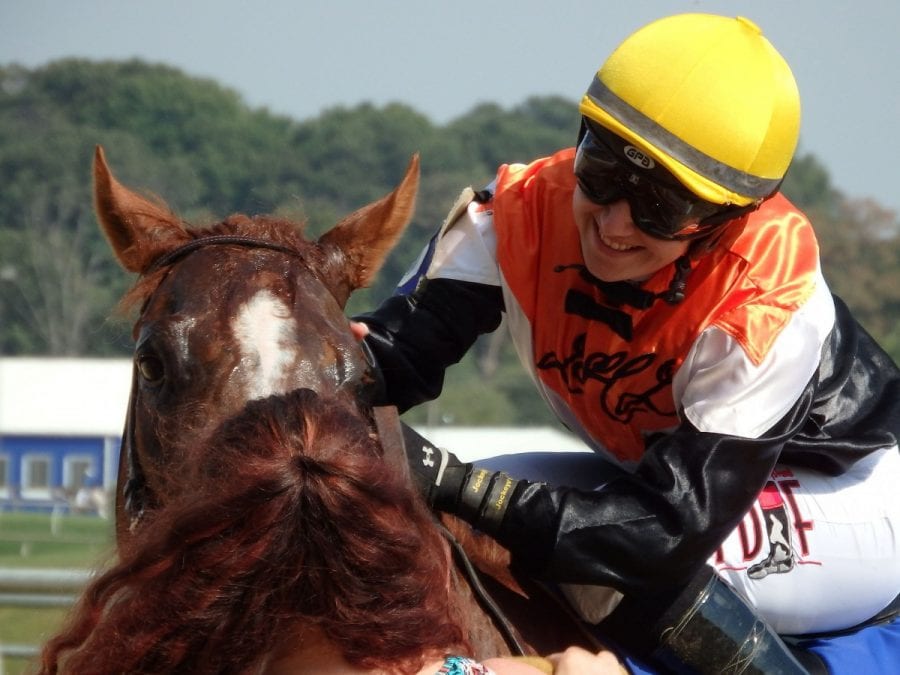 Ashley Castrenze smiles and pets her mount after winning the Laurel Futurity aboard Caribou Club. Photo by The Racing Biz.

Five-pound apprentice rider Ashley Castrenze, out since mid-October, will be on the shelf another 10 days at a minimum, she said on Twitter.

The 19-year-old was injured October 16 when her mount, Cats Serenade, broke down during the running of the ninth race, a maiden special weight event for two-year-olds going 1 1/16 miles on the turf.  Cats Serenade, chasing the pace and just a length back, broke down and fell nearing the stretch, triggering a chain reaction that saw three riders unseated.

Out since, Castrenze told a follower on Twitter that she will not be able to ride again until she receive a doctor’s clearance and that her next appointment is November 21.

I wish! I broke 4 ribs, have to wait till I get the okay from the doctors to ride again. I have another check up the 21st. Getting bored.?? https://t.co/OfR41Nl0EY

Castrenze, in her first year as a jockey, has won with 47 of her 329 mounts to date, garnering $1,157,405 in purse earnings in the process.  She notched her first stakes win back in September when she piloted Caribou Club to a narrow score in the Laurel Futurity.