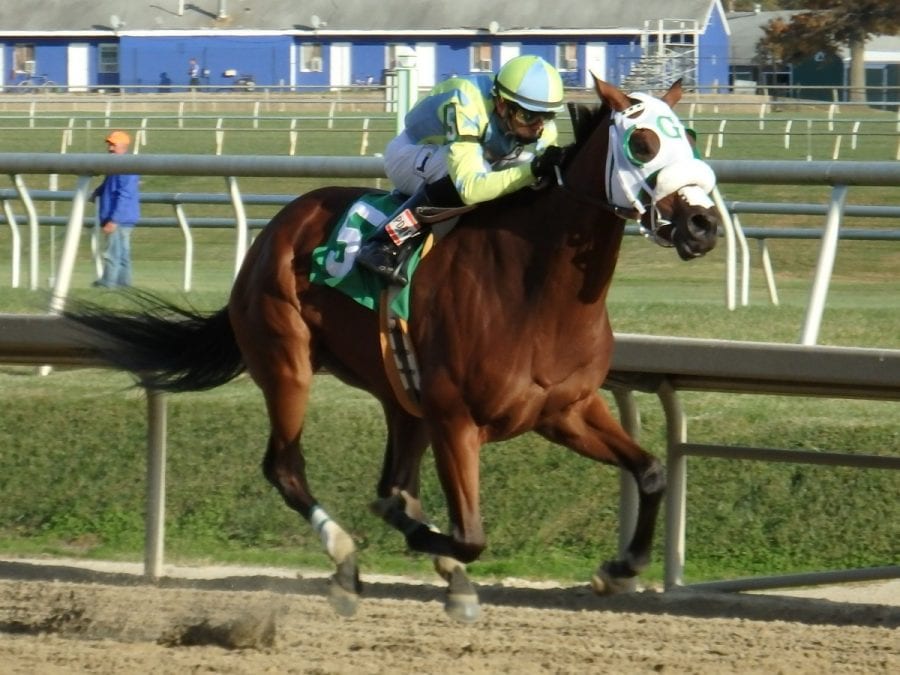 Matt Schera’s John Jones cruised to the lead around the far turn, took command at the top of the stretch and, with one light tap from the whip of jockey Luis Garcia, powered down the stretch to his fourth consecutive victory in Sunday’s $60,000 Jewel on Claiming Crown Preview Day at Laurel Park.

The 1 1/8-mile Jewel was the richest of nine preview races designed to mirror the 18th running of the $1.11 million Claiming Crown that kicks off the 2016-17 Championship Meet at Gulfstream Park on Opening Day Saturday, Dec. 3. All nine winners earned an automatic berth to the Claiming Crown and free shipping to Gulfstream.

A 4-year-old Smarty Jones gelding, John Jones ($3.20) kept his perfect record intact since being claimed by trainer Lacey Gaudet for $25,000 July 17 at Laurel. He was trying two turns for the first time after a pair decisive one-turn mile dirt wins and a victory in the Mister Diz Stakes, a 5 ½-furlong turf sprint, over 26-time stakes winner Ben’s Cat.  The win was John Jones’s fourth since the claim — and one of three for his trainer on the day.

“We were a little afraid about stretching him out to the mile and an eighth. It’s always been a concern, and he just looked like he thrived going two turns today. It didn’t look like it was a problem for him at all,” Gaudet said. “It’s just kind of become a process of seeing how good he can be. You’d always rather have a dirt horse than a turf horse, so I think we lucked out that he’s just as good on the dirt.”

John Jones ran the distance in 1:40.73 over a fast main track and gave Gaudet her third victory of the day following mild upsets in the $50,000 Tiara with Marabea and the $50,000 Emerald with Music Critik.

“It feels really good,” she said. “I think it’s a sign that somebody wants me down in Florida for the winter.”

A front-running winner of his last start who has done his best running on the lead, John Jones was content to let Banner Bill dictate the tempo from his rail post, taking the field through an opening quarter-mile of 24.89 seconds and a half in 49. Garcia had John Jones out in the clear three wide, sailing past the pacesetter without resistance midway around the turn and opened up on his rivals after straightening for home.

“I was a little worried about the speed on the inside but I know what kind of horse I have and Lacey is doing a great job with him,” Garcia said. “My plan was to just break, let the speed go and just sit right off. He relaxed well and he was there. He was there all the way and he’s a neat kind of horse. He’s a real nice horse.”

John Jones hit the wire 4 ¾ lengths ahead of Dynamic Strike in second. It was another 2 ¼ lengths back to Monkey’s Medal in third, with Golden Glint and Banner Bill completing the order of finish. U.S.S. Boxer was pulled up entering the backstretch.

David Jacobson-owned and trained even-money favorite Proper Freud ($4.20) got Sunday’s program off to a thrilling start, swinging wide for a steady drive down the stretch to reel in 19-1 Risky Guy and win the $40,000 Express.

The 5-year-old son of Afleet Alex won for the second time in as many starts since being claimed for $40,000 out of a runner-up finish Aug. 24 at Saratoga. Proper Freud ran six furlongs in 1:10.97 over a fast main track with Risky Guy second and pacesetter Alfredo Romana third.

Removing blinkers and adding Maryland’s leading rider Trevor McCarthy proved to be a winning combination for Jeremiah Kane’s A Place to Shine ($7.20) in the $40,000 Glass Slipper. The 3-year-old Tale of Ekati filly saved ground on the rail into mid-stretch, shifted three wide past the eighth pole and wore down 6-5 favorite Sweet On Smokey for a half-length victory.

A narrow second three starts back in the Delaware Oaks (G3) July 9, A Place to Shine was claimed for $12,500 March 17 at Gulfstream Park by trainer Kathy Mongeon. He hit the wire in 1:38.55 on the main track followed by Sweet On Smokey and Chapel of Chimes, who had her win streak snapped at three races.

English-bred Marabea ($15.80), Group 3-placed in Italy two years ago, was unhurried early racing on the inside before splitting horses once straightened for home to run down front-running favorite Seeking Treasure and capture the $50,000 Tiara by a length by 1 ¼ lengths in 1:41.15 over a firm Bowl Game Turf Course.

It was the first start for the 4-year-old filly since being claimed for $25,000 by trainer Lacey Gaudet for Farfellow Farm Ltd. Sept. 2 at Saratoga. She had been off the board in two stakes tries last year after coming to the U.S. Winner of the Dahlia Stakes April 16 at Laurel, Seeking Treasure held second ahead of Pink Elephant.

Winning Move Stable’s Spectacular Me ($4.60), confidently handled by jockey Alex Cintron in his first time aboard, stalked the early leaders until taking over at the top of the stretch and drawing away under a hand ride in the $40,000 Distaff Dash.

Making her Laurel debut, the 6-year-old Catienus mare covered 5 ½ furlongs on a firm Exceller Turf Course in 1:02.48 for her 14th career victory from 46 starts. Dancing Lucy was outrun after making a late bid from outside Post 13 but finished second, with Shaboom third.

T D C B E Stable’s It Behooves Me ($10) settled in behind the first flight of horses and then came charging through an opening down the middle of the stretch to draw clear and take the $40,000 Rapid Transit, 1 ¼ lengths ahead of a fierce duel for second won by Mack the Knife, a nose in front of Fire Mission.

It Behooves Me, a gelded 4-year-old son of Bluegrass Cat, ran seven furlongs in 1:23.72. He had raced primarily in California, including his previous 10 starts, before being claimed for $16,000 by trainer Kieron Magee out of a runner-up finish in his previous effort Sept. 25 at Los Alamitos.

Newport Stables’ American Sailor ($15.80) broke running from Post 8, sizzled through opening fractions of 21.59 seconds for a quarter-mile and 43.83 for the half, and flirted with a track record winning the $40,000 Canterbury in impressive fashion.

Under jockey Horacio Karamanos, his second winner of the day, the 4-year-old City Zip ridgling hit the wire in 1:01.43, just two-fifths of a second off the Bowl Game course record of 1:01 set by Coastal Sea July 24. Grand Old Game held off Laurel Dash runner-up Triple Burner by a neck for second.

Music Critik ($21.20) gave Farfellow Farm its second win of the day in the Emerald, slipping through a seam on the inside of pacesetter Heiko at the top of the lane and outfinishing the stakes winner for his second consecutive victory.

The winning time for 1 1/16 miles over the Exceller layout was 1:40.73 for Music Critik, a 6-year-old Unbridled’s Song gelding who is now 2-for-4 lifetime on the grass. Heiko held on for second by three-quarters of a length over late-running My Enigma.

“He ran a helluva race. We liked this horse. He’s really become good since he’s gotten on the turf and he ran so nice the other day and came out of it great, we just decided it’s here we might as well go for it,” Gaudet said. “He surprised me. This was a lot to ask of him today.”

Co-owned and trained by Mary Eppler, Double Whammy ($5.20) wrapped up the day’s action by surging to the lead with less than two furlongs to run and spurting away in the $40,000 Iron Horse, giving Karamanos his third win of the day.

Unraced following a third-place effort over a sloppy track in an open allowance Aug. 1 at Penn National, Double Whammy ran 1 1/16 miles in 1:44.93. Twocubanbrothersu, favored at 2-1 off three consecutive wins but making just his second start since March, was second over 11-year-old No Brakes, who closed strongly from dead last to pick up third.

This will mark the fifth consecutive year the Claiming Crown will be contested at Gulfstream. Created in 1999 to honor the blue-collar horses that are the foundation of the racing industry nationwide, the Claiming Crown historically has drawn entries from all parts of North America and from many of the country’s leading stables.

The Claiming Crown is a “joint venture” between the National Horsemen’s Benevolent and Protective Association (HBPA) and the Thoroughbred Owners and Breeders Association (TOBA). The Claiming Crown was created to be the claiming horse owner’s Breeders’ Cup; a special racing event, created for the “average owner,” and featuring some of the most competitive horses in the country.