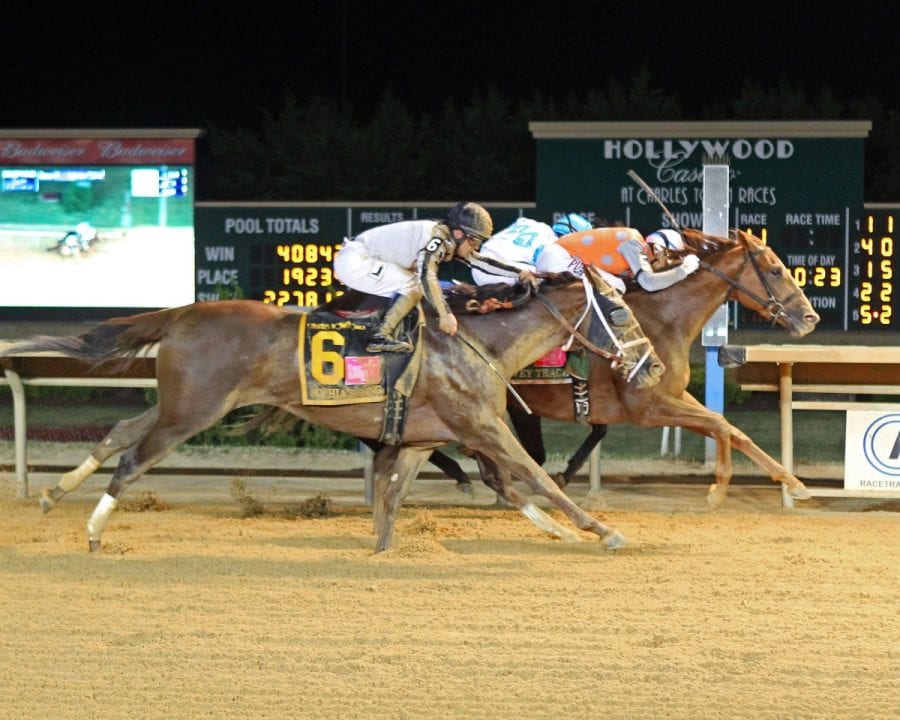 Covey Trace (between) prevailed in a three-way photo in the G3 Charles Town Oaks. Photo by Coady Photography.

When trainer William Denzik had Covey Trace in his stable as a two-year-old, he knew she had ability. And on Saturday night in the $350,000 Charles Town Oaks (G3), the filly by Stevie Wonderboy provided her trainer’s small stable with its biggest moment yet as she took the lead in late stretch and held off Mia Torri and odds-on favorite Sophia’s Song to give both Denzik and Covey Trace’s jockey Arnaldo Bocachica the first graded stakes wins of their respective careers.

“I knew I she had ability back when she was a baby,” said Denzik by phone after the race. “She fought shins all through her two-year-old year that weren’t bad but stopped her from being who she really was, so we gave her the time off, let it heal and when she came back she started working pretty good. She’s always been a smooth moving filly that we always thought might be really ok.”

Sent off as the 2.70-to-1 second choice in the field of six, Covey Trace sat in fifth early on, right behind Sophia’s Song and jockey Javier Castellano who had gotten off to a slower start than expected. Bocachica knew the Pletcher trainee was the horse to beat and kept tabs on her from the get-go.

“When the horse outside (Sophia’s Song) broke a little slow, she didn’t want to go and when she went down to the inside, she wasn’t happy there,” said Bocachica, who is the leading money earner among jockeys this year at Charles Town. “I kept my eye on her the whole race. When I let me filly go, she responded right away and carried me to home.”

Sophia’s Song – who found herself last going up the backstretch – closed mightily to finish third, just a nose behind Mia Torri who had set the pace. Giddy Up checked in fourth with Quick Release and Decoratedwithstyle rounding out the order of finish.

For Denzik, the win in the Charles Town Oaks is something he recognizes as the high watermark of his career.

“We’re a small stable and the partner that owns her with me (Brook T. Smith Investments LLC), we’re getting into it pretty big and we’ll probably be buying some more horses. But for me, I’ve only got three horses running right now so this is pretty huge for me.”

For Bocachica, his happiness after the race was for the win, but also for what it meant to win a race of this level at his home track.

As for what’s next for the Charles Town Oaks heroine, Denzik pointed to a logical spot for three-year-old filly sprinters.

“We’ll probably look at the Raven Run at Keeneland. It’s close. And it’s a Grade 2 and we’re sure it’ll be tough but we might look at that.”