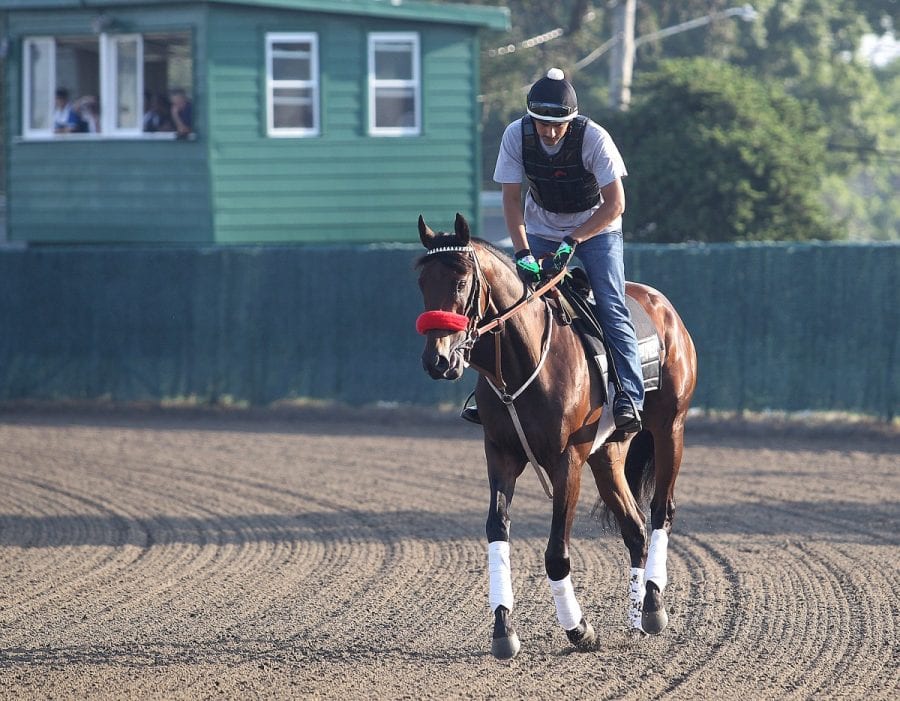 From the West Coast to the East Coast, Kentucky Derby winner Nyquist and Iowa Derby winner American Freedom touched down at Atlantic City International Airport just after 3 p.m. and arrived at Monmouth Park late Wednesday afternoon for their run in the Grade 1, $1 million betfair.com Haskell Invitational on Sunday.

Nyquist, who shipped in from Del Mar this afternoon, is making his first start off a third-place finish in the Preakness at Pimlico on May 21, the first blemish in his nine-race career.

A 3-year-old colt by Uncle Mo out of the Forestry mare Seeking Gabrielle, Nyquist made his final preparations for his run for Haskell glory on July 24 at Del Mar when he went a mile in 1:39 2/5.

Owned by Reddam Racing LLC, Nyquist broke his maiden at first asking before finishing off his undefeated 2015 season with three straight Grade 1 wins, capping it with a victory in the Breeders’ Cup Juvenile at Keeneland en route to 2-year-old champion honors.

Nyquist started his sophomore season with a win in the seven-furlong Grade 2 San Vicente at Santa Anita before making his first trip to the east coast and taking the field wire-to-wire in the Grade 1 Florida Derby.

Along with Nyquist, trainer Bob Baffert’s American Freedom flew in from Del Mar to try and give his conditioner a record ninth Haskell title.

Owned by Gary and Mary West, American Freedom exits a score in the Grade 3 Iowa Derby at Prairie Meadows on July 1 where he broke sharply from the gate and took a narrow lead going into the first turn. From there, the colt never looked back, posting a 4 ¾ length win.

A son of Pulpit out of the Pleasant Tap mare Gottcha Last, American Freedom is 3-for-4 in his brief career having graduated from the maiden ranks at first asking before finishing sixth in the Grade 3 Pat Day Mile on Kentucky Derby Day. He earned his way back to the winner’s circle on the Preakness undercard in the Sir Barton Stakes by a length.

American Freedom worked Tuesday over the Del Mar main track in his final work for the Haskell. He ran the four furlongs in a bullet :47 flat.

Earlier on Wednesday the connections of Preakness winner Exaggerator announced that their Classic winner will be joining the betfair.com Haskell field. The Keith Desormeaux-trainee is expected to ship from Saratoga to Monmouth on Thursday.

Two locally-based runners will be looking to take home this year’s betfair.com Haskell trophy: Live Oak Plantation’s Awesome Slew, who goes for trainer Eddie Plesa, Jr., exits a third place finish in the Grade 3 betfair.com Pegasus at Monmouth on June 19, and Dennis Drazin’s Grade 3 Withers champion Sunny Ridge, trained by Jason Servis, makes his first start off a nearly five-month layoff and is 2-for-2 over the Monmouth main track.

Two other Derby horses look to get revenge in the betfair.com Haskell. Gun Runner, third in the Derby for Steve Asmussen, comes in off a score in the Grade 3 Matt Winn Stakes at Churchill Downs while Brody’s Cause, seventh in the Derby, is a multiple Grade 1 winner.