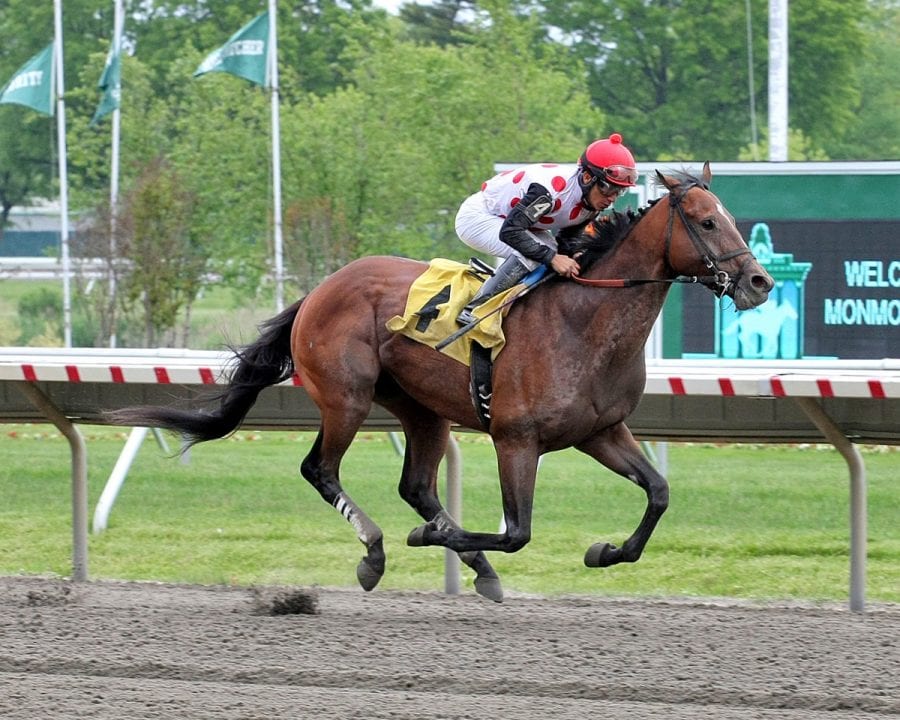 The veteran trainer knows that Awesome Slew has had his share of issues in his short life, including a severe battle with colic that nearly claimed the horse’s life in the spring at Gulfstream Park.

“We had to ship him to Palm Meadows to get treated,” Plesa said. “It was a question of him recovering. We had to make the decision to go ahead and put him in a van for four-and-a-half hours. It could have been catastrophic. I felt confident enough with the vet.”

The horse’s owner, Charlotte Weber of Live Oak Plantation, has enjoyed a great relationship with Plesa for many years.

“She said, “Do what you do,’” Plesa said. “I said to her, “We’ll get him back in shape. Put your confidence in me.’ We almost lost him. It was severe, but everything usually works its way out. There was a lot of decision making involved, but it worked out well.”

Awesome Slew, a Florida-bred Awesome Again colt that Live Oak also bred, then returned to his home at Monmouth Park’s stables to fully recover. He is listed among the probable candidates for Sunday’s $1 million Betfair.com Grade 1 Haskell Invitational at Monmouth.

“I think we have a chance,” Plesa said. “He’s over what he had and now looks better than he’s ever looked. “

Awesome Slew won his debut in June of 2015 at Monmouth Park in a five-furlong maiden special weight, clearing the field in 58.76.

“We always had high hopes for him,” Plesa said. “He was something out of the ordinary.”

A month later, Plesa entered Awesome Slew in the Grade 3 Sanford Stakes at Saratoga, a race that was won by Uncle Vinny via disqualification. Awesome Slew rallied from seventh to finish fourth, beaten just two lengths. But that was the last race of his 2-year-old campaign.

Awesome Slew’s return to the track came May 21 at Monmouth and after nearly a 10-month layoff, he won a $40,000 allowance-optional claiming race, winning the six-furlong race by three lengths with a solid move at the top of the stretch.

His next race was the Grade 3, 1 1/16 mile Pegasus Stakes at Monmouth Park June 19, and Awesome Slew ran extremely well for the first try around two turns.  Just a couple of lengths off the early pace, Awesome Slew and jockey Paco Lopez took the lead  in the stretch before tiring and fading to third behind Todd Pletcher’s Donegal Moon.  Unified, the highly regarded Jimmy Jerkens trainee sent off as the 3-10 favorite, finished fifth.

“Paco moved him just a little early and he tired,” Plesa said. “It was his first time around two turns.”

But in the month since the Pegasus, Plesa sees a totally different horse.

“I see a bigger and stronger horse,” Plesa said. “He’s a lot better than what we had when he ran in the Pegasus. If he was then what he is today, there’s no doubt where he would have finished.”

“No question, we’re taking a few steps up,” Plesa said. “But it’s our home court (Awesome Slew is stabled at Monmouth), so that’s an advantage for us. We’re due for a surprise. We will find out soon enough.”

Plesa believes that Awesome Slew is on the rise.

“I told Mrs. Weber (at the Pegasus) that this will not be his best race,” Plesa said. “I said that his next race would be the best. This horse’s best races are in front of him. He’s been compromised in everything he’s done. Three of the four races he’s had, he’s had excuses and he won two of them.”

Plesa has enjoyed a favorable meet at Monmouth thus far, winning 16 times in 54 mounts, with his horses earning almost $400,000 in purses.  Both numbers are good for fourth in the track’s trainer standings.

“The meet has been very good,” said Plesa, who hopes to place another top horse Mr. Jordan in a stakes race on Haskell Day. “I have a lot of 2-year-olds that I’m working with. Those are the horses that I like. My hope is that I can continue that trend.”

And perhaps somehow to steal the winner’s share of the $1 million purse with his hard-luck horse.