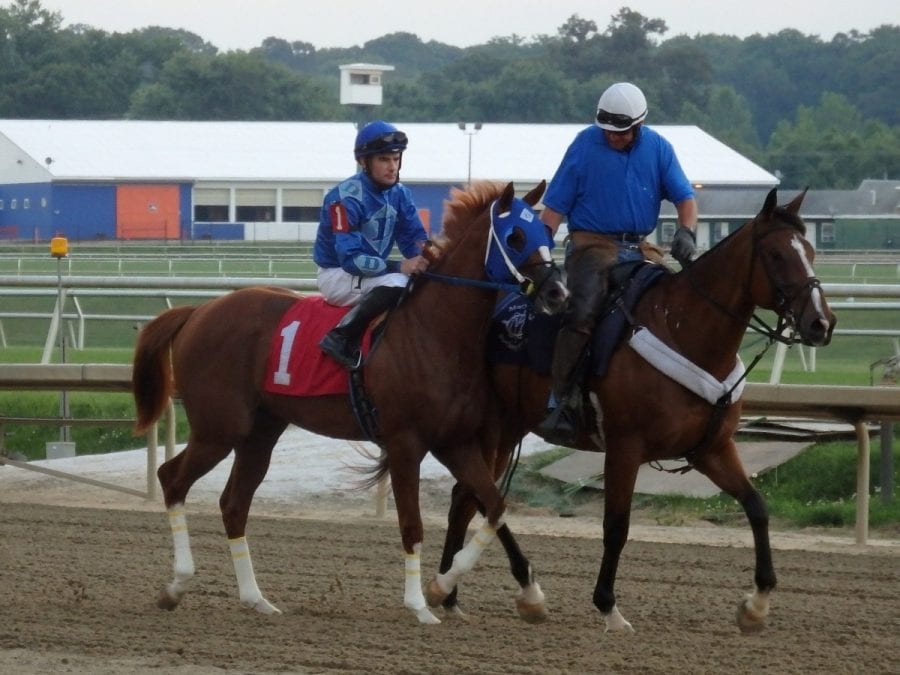 Inspired Flight prior to her debut. Photo by The Racing Biz.

It’s doubtful that Inspired Flight will get much attention from bettors in Friday’s Grade 3 Schuylverville Stakes at Saratoga Race Course.  She’s 15-1 on the morning line.

After all, bettors back home, at Laurel Park, didn’t give her much respect in her debut, on July 1.  Sent off at 13-1, the daughter of Orientate zipped to the early lead, fought off a bold challenge in mid-stretch, and surged to a one-length victory under jockey Feargal Lynch.  It was, trainer Phil Schoenthal said after the race, “a rock star effort.”

“There’s times when you feel like you beat a legitimate group of horses and that says something about who you are, and that’s where we were with this horse,” said Schoenthal, by phone en route to Saratoga Wednesday.

The field she beat that day at Laurel was highly regarded as one of the better juvenile maiden events of the season in Maryland.

Now, though, she’ll have to swim in much deeper waters.

“She’s doing awesome,” said Schoenthal.  “We weren’t dead set on running her [in the Schuylerville].”

But the filly, bred in Maryland by Sycamore Hall Thoroughbreds, made the case herself.  On July 14, in her first work since breaking her maiden, Inspired Flight fired a bullet, breezing four furlongs in 47 seconds flat “with her ears pricked,” her trainer said, and galloping out in 59 seconds.

“It was a very impressive workout,” Schoenthal said.  “Better than I was expecting.”

Good enough, in fact, that it convinced him to take a swing at graded company.  A win here would also be the trainer’s first at the Spa, an achievement he said he’s “anxiously awaiting.”

“My horse is going to outrun her odds,” Schoenthal said.  “I feel like she’s going to move forward and run her better race.”

She’ll have to do it with a different pilot than she had in her debut.  Feargal Lynch, who rode her to the maiden score, is named on five horses in Maryland Friday and opted to remain at home.  In his stead, Edgar Prado has the mount.

“Prado is a guy you have complete confidence in,” said Schoenthal, “a Hall of Fame-caliber rider.”

Steve Asmussen trainee Made Me Shiver (5-2) is the morning line favorite off an easy debut victory at Churchill Downs.  Olive Branch (3-1), who broke her maiden at Belmont Park for trainer Rick Violette, and another Belmont maiden winner, David Donk trainee Platinum Spark (7-2), also figure to get plenty of action.

A top three finish would not only give Inspired Flight’s owners, Schoenthal and Matthew Dorman, a nice payday — the Schuylerville purse is $150,000 — but also give her graded black type, which would bolster both her value as a broodmare and that of her offspring.  She is out of the winning Not for Love mare I Love to Fly.

Win or lose, there’s a pretty good chance that Marylanders will get a good look at the Laurel Park-based runner.  The Maryland Million Lassie, October 22, and Maryland Juvenile Filly Championship, December 10, both figure to be on her dance card.  There are also three open stakes for juvenile fillies in the fall calendar at Laurel.

And since Schoenthal is a guy who says he’d rather win the Preakness on his home turf than the Kentucky Derby, that sounds like a pretty full agenda.