Del Cap undercard report: A record in the Kent 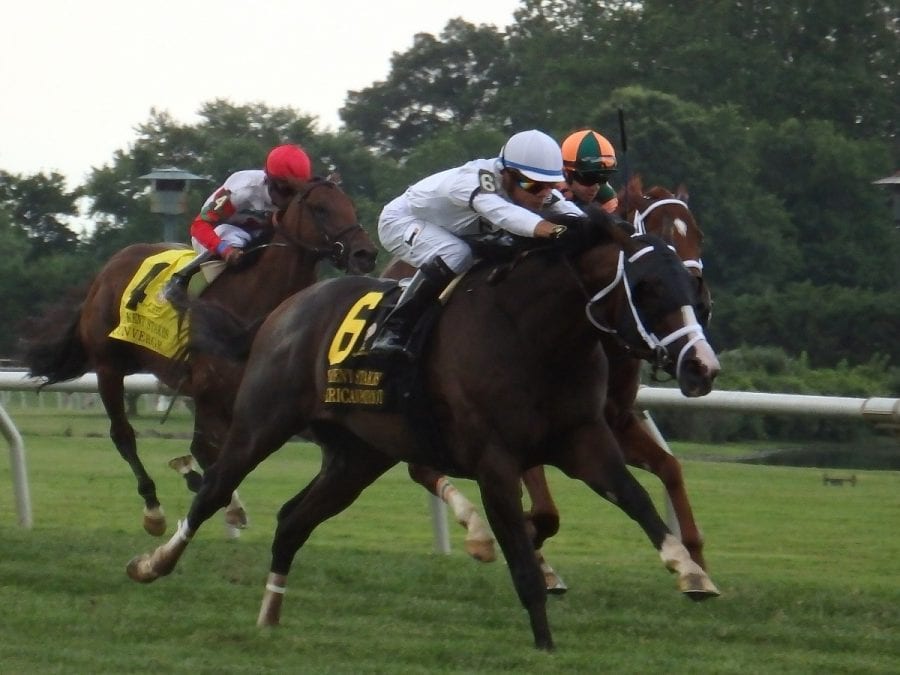 American Patriot wins the Kent. Photo by The Racing Biz.

WinStar Farm’s American Patriot won the $200,000 Grade 3 Kent Stakes in record setting fashion at Delaware Park today. With Jose Ortiz aboard, the 3-year-old son of War Front established a new track record for a mile and an eighth on the turf by running the distance in 1:47.19. The previous record was held by Optimizer who ran the distance in 1:47.27 in 2012.

He’ll Pay, with Florent Geroux, cut early fractions of :48.20 for a half mile and 1:12.00 for the three-quarters before finishing second a neck in front of Inspector Lynley, with Joel Rosario, in third.

American Patriot raised his career record to three wins from six starts with earnings of $212,012. He returned $5.40 as the favorite in the field of seven. The Kent Stakes was the first career stake victory for the Kentucky-bred trained by Todd Pletcher.

“I asked him to go at quarter pole, he gave me a great run for the quarter pole to the wire,” said winning rider Jose Ortiz. “I think he is a really nice and he will improve. You are going to hear more about this horse.”

A week ago, Grade 3 winner Green Gratto tired to be a well-beaten fifth in the Grade 3 Belmont Sprint.  Most trainers would likely have given their horse a little time before his next start.

Not Gaston Grant, however — and that turned out to be a good thing.  Wheeling back just a week after that defeat, Green Gratto outslugged Big Guy Ian in a racelong battle, finally prevailing by three-quarters of a length to win the $50,000 Hockessin Stakes at Delaware Park.

The Hockessin was the first of four stakes on the card at Delaware today, topped by the Grade 1 Delaware Handicap, won by I’m a Chatterbox.  It also saw a track record-setting performance by American Patriot in the Grade 3 Kent Stakes.

“He was acting like he wasn’t tired,” Grant said of his star charge.  “He came out of that race pretty well.”

In the lane, Green Gratto gradually got the better of Big Guy Ian, inching clear for the victory and stopping the clock in 1:10.82.  Sir Rockport, the longest shot on the board, ran on late to be third, 1 1/2 lengths behind the winner.

Green Gratto’s first win of the season gave him seven career victories and pushed his earnings to $733,038 for owners Anthony Grant and Gaston Grant.  The favorite, Green Gratto paid $5.00 to win and topped an exacta worth $50.40.

Jose Corrales seems to have unlocked the secret to Bodhisattva, and now the four-year-old Student Council colt is looking like a force to be reckoned with on the local stakes scene.

Corrales’ star pupil rallied smartly from sixth in a seven-horse field to post a 1 1/4 length victory in today’s $50,000 Carl Hanford Memorial Stakes to lodge his second straight win and fifth overall in 20 career starts.  He now has earnings nearing $240,000.

Bodhisattva has had a somewhat checkered career: from winner of the 2015 Federico Tesio Stakes and Grade 1 Preakness entrant to running up the track versus $40,000 claimers.

But Corrales, when reunited with the horse this spring, had an idea.

“I told [jockey Taylor Hole], ‘Just take it back and make one run,’” Corrales said after Bodhisattva’s June 19 win at Pimlico.  “‘You don’t have to rush him or fight him or put him in the lead. He’s the type of horse, if you don’t do the right thing, he will not run anywhere.”

Bodhisattva, again ridden by Hole, led a parade of closer to the wire.  Savoy Stomp, fifth after three-quarters of a mile, finished second, and favored Kid Cruz, who was last early, came in third.