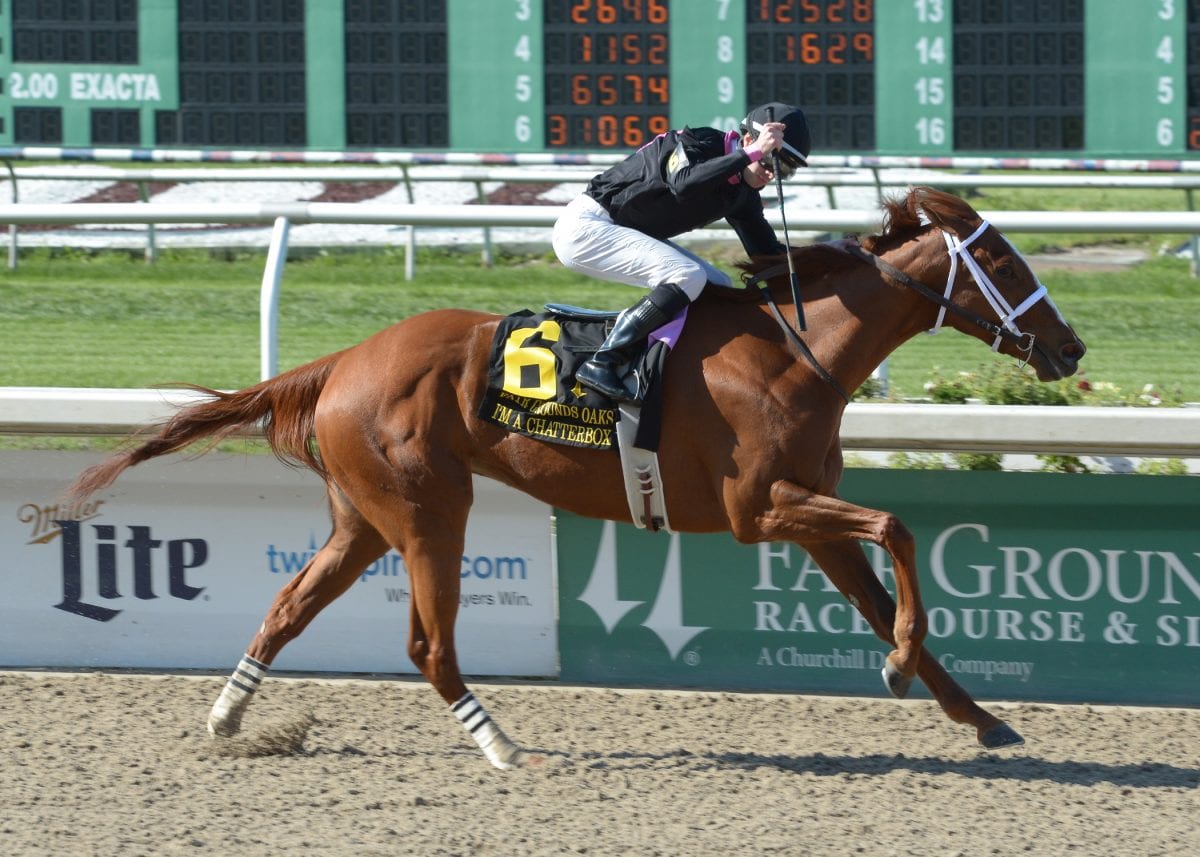 I’m a Chatterbox at the Fair Grounds in 2015. Photo by Alexander Barkoff / Hodges Photography

Fletcher and Carolyn Gray’s locally-based I’m A Chatterbox is ready to face a strong contingent of shippers in the 79th renewal of the Grade I Delaware Handicap this Saturday. The mile-and-a-quarter $750,000 filly and mare summer classic has attracted a field of six.

Last year, the 4-year-old Kentucky-bred daughter of Munnings won four stakes; the Grade I Cotillion at Parx, the Grade II Fair Grounds Oaks, the Grade III Rachel Alexandra at Fair Grounds and the $125,000 Silverbulletday Stakes at the Fair Grounds. The filly, conditioned by J. Larry Jones, won the Grade I CCA Oaks at Saratoga, but was disqualified and placed second.

This year, she finished second in the Grade III Doubledogdare at Keeneland on April 22. In her most recent start, she posted an 8 ½-length victory in the $100,000 Obeah Stakes at Delaware Park on June 11. She has a career record of six wins, three thirds and two seconds from 13 starts with earnings of $1,384,614.

“She has been doing well,” said trainer J. Larry Jones. “We have worked her one time since the Obeah, but she got enough out of that race to cover her a long way. She should be ready to go. We kind of had to go into Obeah one work short of what I intended, needless to say it worked out okay. She won and ran well, but the Obeah should have us ready and where we need to be. We are good to go.”

While I’m a Chatterbox won the Obeah by daylight, there was a little concern about her coming home slow. The final time for the mile and an eighth was 1:53.20 after the three-quarter mile time was 1:12.86. Gabriel Saez was substituting for her regular rider Florent Geroux, who called Jones and told him not to be concerned.

“Florent (Geroux) actually called me after the race and told me not to worry about it,” said J. Larry Jones. “He said the filly acted in the same manner with him when they won the Silverbulletday at the Fair Grounds. She opened a sizable lead and he said she just started losing focus. When she gets a lead like that, you just have to keep her really focused if you want her to do more. He told me I shouldn’t worry and he will be aboard for the Del ‘Cap.”

In 2005, the 59-year-old native of Hopkinsville, Kentucky won the Delaware Handicap with Island Sand. The following year, he moved his entire operation to Delaware Park and since then has developed filly and mare superstars like Believe You Can, Eight Belles, Lovely Maria, Proud Spell and Havre de Grace at the historic Stanton-oval.

“It has been awhile since I have won this race,” J. Larry Jones said. “It was in 2005 that I initiated the Delaware Park phase of my career. It has been eleven years; it is about time we win it again. We have had a pretty good run in this race and we sure would like to win another one.”

Klaravich Stables and William Lawrence’s Paid Up Subscriber will look to move forward after notching a 3-length triumph in her first around two turns in the mile and an eighth Grade II Fleur de Lis at Churchill Downs on June 18. Previously, the 4-year-old daughter of Candy Ride had six starts going around one turn. On May 6, she notched a length victory in a one-mile allowance at Churchill Downs. She has a career record of four wins and a third from eight starts with earnings of $278,300.

“The Fleur de Lis was her first race around two turns and she handled it really well,” said her trainer Albert Stall Jr. “I got to think her last race will set her up great for the Delaware Handicap. Her sire is Candy Ride who won the Pacific Classic and her broodmare sire, Street Cry, won the Dubai World Cup, so she also has the pedigree for a mile and a quarter.”

Todd Pletcher will enter Barry Schwartz’s Mei Ling in the Delaware Handicap. The 5-year-old daughter of Empire Maker has a career record of four wins, eight seconds and four-thirds from 21 starts with earnings of $477,383. In her most recent, the Kentucky-bred finished second in the mile and a half $150,000 Rags to Riches on June 10.