Legal Punch strikes a blow – and pays the bills 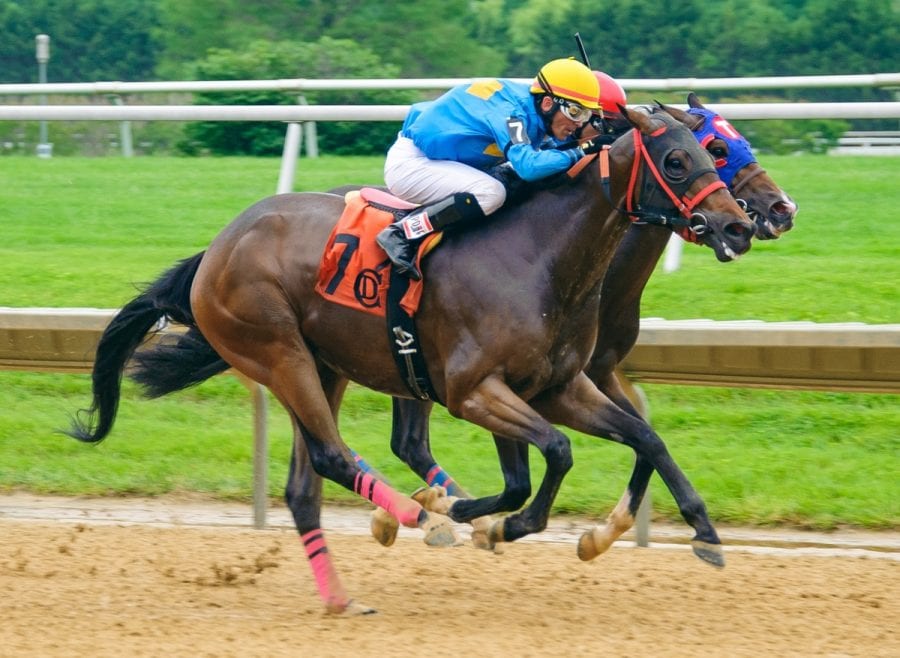 Legal Punch won at Delaware on May 30. Photo by HoofprintsInc.com.

Legal Punch’s 23-1 upset at Delaware Park May 30 struck a blow — both for the modest stables that populate mid-Atlantic racing and initiatives, like the Delaware Certified Thoroughbred Program, designed to incentivize them.

When the Delaware Certified Thoroughbred Program was instituted back in 2002 the aim was to give owners and breeders in Delaware and the Mid-Atlantic region some economic advantages for supporting racing in the First State.

And while there have been some high-profile participants in the program like Work All Week and The Pizza Man, it’s the more modest horses have benefited most from the D.C.T.P.

Take the case of Legal Punch’s owners, Don and Lucy Churchill. The Churchills have owned horses for more than 25 years, and in the early years their runners were mainly lower class claiming horses.

Then the D.C.T.P. was started and the Churchills decided to change their approach to owning horses.

“Lucy and I talked it over and decided that instead of trying to find horses solely through the claiming ranks, we’d start buying weanlings and yearlings, register and certify those young horses in the Delaware program, and in a sense, make an investment in the future of racing in the state,” Don Churchill recalled by phone from Churchill Farm in downstate Milton, DE.

“We felt the added bonuses for certifier and owner would allow us to stay in the business, and if our babies were productive, we would even be able to expand a bit,” he continued.  “If we had a productive year, the money we received from the D.C.T.P might allow us to buy 3 yearlings instead of 2 or an extra weanling.”

Legal Punch is an example of that strategy — and how the program is helping owners like the Churchills.  Purchased by the Churchills as a yearling for $1500, Maryland-bred Legal Punch was registered and certified.  Since the D.C.T.P. pays out for horses finishing first, second, and third at Delaware Park, he actually earned some D.C.T.P. funds even before his first win by finishing second twice at Delaware in maiden events and then running second behind the top flight Cinco Charlie in the $75,000 Free State Stakes.

He completed his juvenile campaign by running second to Golden Years  in the $100,000 Maryland Million Nursery Stakes in the fall of 2014, giving him four seconds from five starts.

Last season Legal Punch, trained by Sam Cronk, left the winless ranks in a maiden turf sprint at Delaware Park, and the Deputy Storm gelding earned the Churchills a bonus of $10,200, $5100 as the owners and an additional $5100 as the certifiers.

Legal Punch came off a six month layoff running on May 30th when he ran down the leaders in an optional allowance sprint to post a half-length upset at 23-1.  Again the D.C.T.P. bonus was a significant addition to Legal Punch’s earnings, as the Churchills received $5400 as owners and an additional $5400 as certifiers.

Put it together, and those two wins have provided the Churchills $21,000 in DCTP money, only half of which is reflected in the horse’s career earnings (since the half that goes to the certifier doesn’t count as purse earnings).

Don Churchill, whose early pals on the track included the legendary horseman Virgil, “Buddy” Raines, says for owners in his economic range, the D.C.T.P. plays a crucial role in allowing them to stay in the business and have their runners get boosts in purse money for supporting Delaware racing.

“We’re never going to have 15 or 20 horses, we just don’t have that kind of money (the couple has three horses in training presently) but before we got involved in the D.C.T.P. we were racing bottom claiming horses with little hope of having a nice horse,” Churchill concluded, “Now we’ve got a horse that just topped the $116,000 mark in career earnings and he’s only run 12 times. Hopefully we’ll get a chance to run him again in the Free State on Owners’ Day. We would have had little chance to have a horse like this were it not for the funds our horses have earned through the program.”