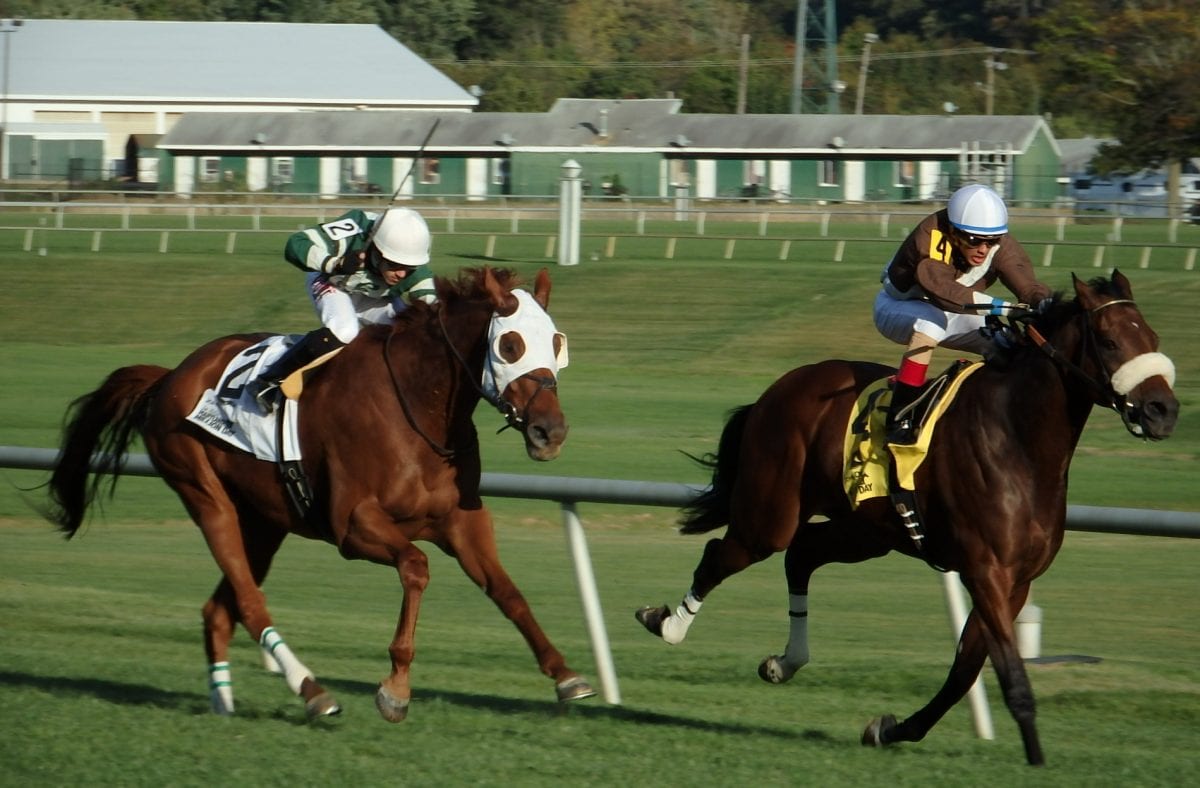 Phlash Phelps held off Roadhog to win the 2015 Maryland Million Turf. Photo by The Racing Biz.

Five turf stakes at Pimlico worth $330,000 for horses bred in Maryland and Virginia have attracted 122 nominations.

The races, to be run Saturday, June 25, come on closing weekend of the 28-day Preakness Meet at Pimlico. The spring stand ends June 26 before racing shifts to Laurel Park for its summer meet starting Friday, July 1.

Defending champion Phlash Phelps tops a list of 16 horses nominated to the $75,000 Find Stakes for Maryland-breds 3 and up going 1 1/8 miles. Trained by Rodney Jenkins for Hillwood Stables, the 5-year-old Great Notion gelding has won five of his last six starts including the 2015 Maryland Million Turf and a 1 1/16-mile grass allowance on the Black-Eyed Susan Day undercard May 20.

Also nominated are stakes winners Sonny Inspired and Jack’s in the Deck; Private Terms Stakes runner-up Flash McCaul and Everyplayeveryday, second by a half-length to Phlash Phelps in the 2015 Find.

The $75,000 All Brandy Stakes for Maryland-bred fillies and mares 3 and older at 1 1/8 miles attracted 13 nominations led by Fitzhugh LLC’s Candida H., who has finished in the top three in 11 of 12 with four wins, including the Conniver Stakes Jan. 30 at Laurel; and Charles J. Reed’s 7-year-old multiple stakes-winning mare Monster Sleeping, 10-10-9 from 49 career starts with $516,707 in purse earnings.

Among the 33 nominees for the White Oak Farm is Giant’s Causeway Stakes winner Exaggerated, most recently third in the The Very One on the Preakness Stakes (G1) undercard May 21, and Laurel stakes winners Away We Go and Two Notch Road.

Away We Go is also one of 23 horses nominated to the Nellie Mae Cox, along with Complete St., winner of the 2015 Brookmeade Stakes last fall at Laurel.