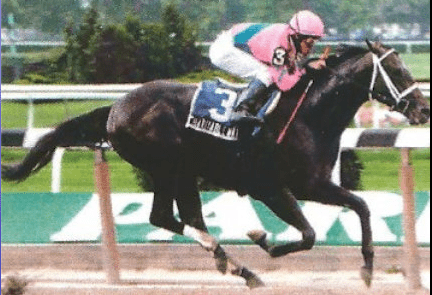 Charitable Man stood at James W. Casey’s Taylor Mountain Farm in Charles Town, WV.  He was 10 at the time of his death, which likely was caused by a heart attack or aneurysm.

As a racehorse, Charitable Man, a Virginia-bred son of Lemon Drop Kid, won three of eight career races with earnings of $475,800.  He won a pair of Grade 2 events, the Futurity as a juvenile and the Peter Pan at three.  He also finished third or fourth in the Grade 1 Belmont Stakes (4th), Grade 2 Jim Dandy (3rd), and Grade 1 Travers (4th) at age three.  He was trained for most of his career by Kiaran McLaughlin for WinStar Farm and for his last race by Tony Dutrow for Mr. and Mrs. William K. Warren, Jr.

Bred by  the late Edward P. Evans, Charitable Man was out of the stakes-winning Saint Ballado mare Charitabledonation.

It was as a sire, however, that Charitable Man really shone.  He was West Virginia’s leading first crop sire in 2014 and its leading second crop stud in 2015.  The leading third crop sire so far this year, he currently stands fourth on the Mountain State’s general sire list.

Charitable Man’s best runners to date have been Charitable Annuity and Candy Man’s Girl.  The former, a four-year-old gelding out of a Luftikus mare, won seven times in 2015, taking three stakes, including the $500,000 West Virginia Breeders Classic for owner Mark Russell.  After earning his first win of ’16 two weeks ago, Charitable Annuity now has eight wins from 14 career starts and just shy of $400,000 in earnings.