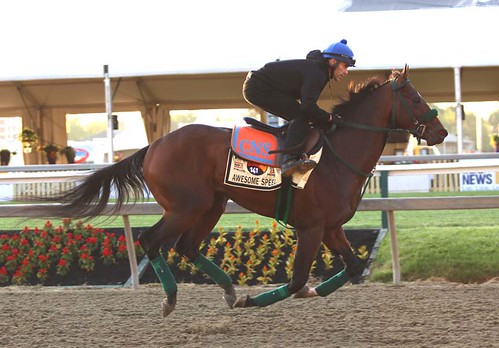 WHO IS AWESOME SPEED?

Awesome Speed sports three stakes win on his resume, including the Federico Tesio Stakes in April at Laurel Park which was a ‘Win and You’re In’ event for the Middle Jewel of the Triple Crown. Awesome Speed led through much of that race, only to get bumped by a competitor in the final steps of the race and finished second by a nose. He was placed first through disqualification for interference. Other stakes victories include James F. Lewis III Stakes as a two-year old and the Mucho Macho Man Stakes at Gulfstream Park in January.

In his only attempt in graded stakes company, Awesome Speed finished fourth beaten 12 lengths in the Grade 2 Fountain of Youth after being bumped at the start and being five wide on the second turn. Jevian Toledo, a 21-year-old who was Maryland’s leading rider in 2015, gets the mount after riding Awesome Speed to victory in the Tesio.

WHAT THEY’RE SAYING ABOUT AWESOME SPEED

“He’s had some good races,” trainer Alan Goldberg said of his multiple stakes winner. “I just don’t really like the flow of the race looking at it. There’s going to be a lot of speed and he wants to be a forward kind of horse.”

With four wins in six career starts. Awesome Speed knows how to win and has done so in stakes company. His sire, Awesome Again, was the 1998 Breeder’s Cup Champion and his breeding suggests that the Preakness distance should not be an issue.

Although he is a multiple stakes winner, Awesome Speed’s speed figures are significantly below several of the other horses in the field and he finished a well-beaten fourth in his only graded stakes attempt. He will need to take a significant step forward to be competitive. Additionally, Awesome Speed should have a lot of company vying for the lead which may force him to expend too much energy in the early stages of the race.