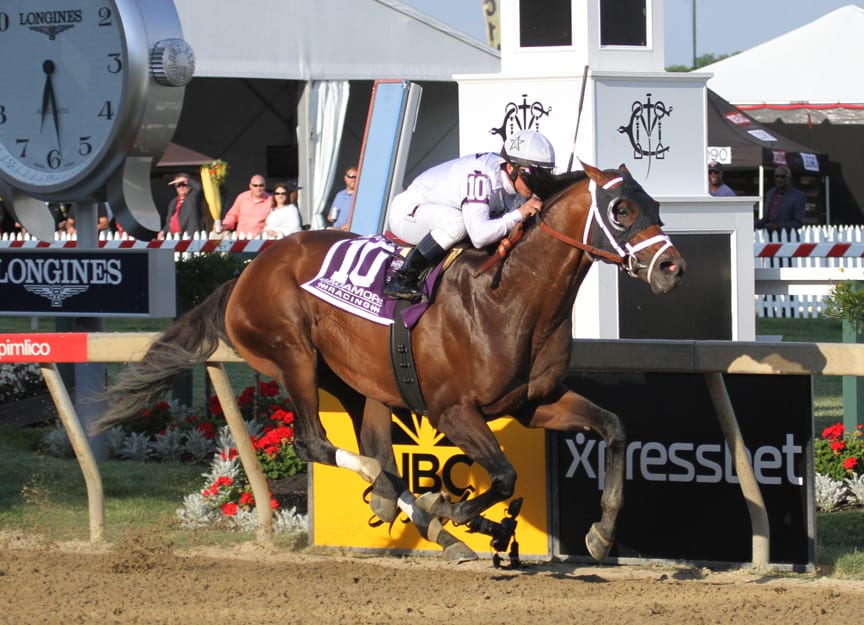 If John Oxley’s Noble Bird can get a clean start in Friday’s $300,000 Sagamore Spirit Pimlico Special (G3), his connections will take their chances on the finish.

Noble Bird is one of eight older horses entered for the 1 3/16-mile stakes, whose rich past includes the iconic 1938 match race won by Seabiscuit over Triple Crown winner War Admiral.

A 5-year-old son of Belmont (G1) and Travers Stakes (G1) winner Birdstone, Noble Bird hopped at the start, was extremely rank and wound up last of eight older horses in the Alysheba (G2) May 6 at Churchill Downs, the site of his Stephen Foster (G1) victory last June.

Julien Leparoux will be aboard Noble Bird for the third straight race, including a second to Eagle after leading most of the way in Keeneland’s Ben Ali (G3).

“He’s a very, very talented horse, but he’s a hard horse to train and he’s really hard on himself,” Norman Casse, son and assistant to trainer Mark Casse, said. “When he broke bad the other day in the Alysheba, every chance that he had of winning or running well in that race got thrown out the window. He’s too difficult to ride and when he breaks bad like that it’s pretty much game over.

“We don’t think he even ran any in that race. Julien pretty much wrapped him up around the turn and we felt he’s still sitting on another big race so it makes sense to send him there. He’s a horse that I think we’re done trying to rate him. Maybe with the little bit longer distance he’ll get the lead a little easier and they’ll leave him alone up front. That’s exactly what he wants. The circumstances may set up perfect for him.”

Page McKenney, last year’s Pimlico Special runner-up who has morphed from a $16,000 claim to $1.4 million-earner, is back at age 6, along with his 7-year-old Mary Eppler-trained stablemate Golden Glint, a $32,000 claim who enters off a three-length victory in a Laurel Park optional claiming allowance race. Both horses are owned by Adam Staple.

Noble Bird, who will break from post 7, might have to battle Stanford for the lead. Stanford, a 4-year-old son of the former Maryland stallion Malibu Moon and who drew post 2 for the Special, went wire to wire in capturing the $1.25 million Charles Town Classic (G2) on April 23.

Stanford, however, could scratch from the Special to train up to the June 11 Metropolitan Mile (G1) in New York. The Pletcher-trained Savoy Stomp, a two-time allowance winner, was a late entry as the Pimlico racing office worked hard to attract more entries to the Special.

“We kind of figured we’d buy some time to look at it,” Pletcher said. “Whether or not Stanford runs could weigh into the decision whether Savoy Stomp does, as well. I entered him in an allowance race at Belmont that didn’t fill, so we were kind of looking for a spot.”

The Dale Romans-trained Hesinfront, winner of a second-level allowance race on the Kentucky Derby (G1) undercard, was made a $3,000 supplemental entry to the Special. The 5-year-old horse is owned by Romans’ long-time client and close friend Frank Jones, who also is co-owner of Preakness contender Cherry Wine.

Idolo Porteno, a multiple Group 1 winner in his native Argentina, was third in his U.S. debut in Oaklawn Park’s Razorback Handicap (G3) but weakened to last of eight in Keeneland’s Elkhorn (G2) on turf. The 6-year-old Jump Start horse is trained by Ignacio Correas IV, who previously trained for race sponsor Sagamore Farm in Glendon, Md., but now is based at Keeneland in Lexington, Ky.

The Pimlico Special was created in 1937 by Alfred Vanderbilt, the master of Sagamore Farm, as the first major stakes in the United States set up as an invitational. War Admiral, carrying 128 pounds as a 3-year-old, won the inaugural running, then was upset by Seabiscuit the next year in what was termed the “Race of the Century” by Sports Illustrated.

The Special was discontinued after 1958 but revived in 1988 by the late Maryland Jockey Club president Frank De Francis. The Special’s winners include Triple Crown winners Whirlaway, Citation and Assault and modern-day Horses of the Year Criminal Type, Cigar, Skip Away, Mineshaft and Invasor.