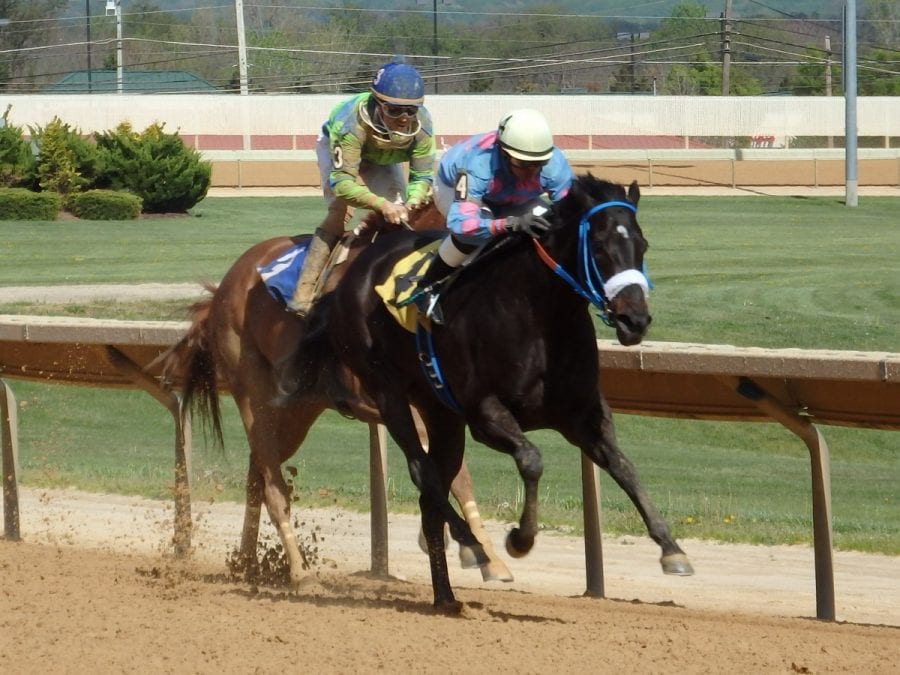 While the Grade 2, $1.25 million Charles Town Classic was clearly the center piece of the card last Saturday afternoon, a quartet of state-bred stakes played a genuine supporting role. Two of them were designated as “Win & You’re In” races for the West Virginia Breeders Classics (WVBC) in October.

About two hours before Stanford captured the Classic, In The Fairway, with Arnaldo Bocachica up, rallied from off the pace to capture the $50,000 Confucius Say Stakes for state-bred older runners. That race was designated as the “Win & You’re In” prep for the Onion Juice on Breeders Classics night, a seven-furlong event that serves as one of the precursors to the much more lucrative West Virginia Breeders Classic at nine furlongs.

A six-year-old Posse gelding trained by Jeff Runco and bred by his and his wife Susan’s Coleswood Farm, In The Fairway notched his second straight win to start the campaign after going winless in 11 outings last season. He forged a 10-1 upset by covering the seven furlongs in 1:25.84 for his 12th win in 35 career outings.

Following his winless 2015, In the Fairway had a critical equipment change.

“We tried him in the Onion Juice last year and he didn’t really fire,” Runco said. “But he’s been a different horse this year since we had him gelded. Last year he didn’t win a race and he just always seemed so lethargic. Early in his career he looked like he was capable of doing some good things. He’s done well, but last year was disappointing.”

Partly Mocha finished second in a good outing for trainer Michael Maker and prominent national owners Ken and Sarah Ramsey. Lucy’s Bob Boy settled for third, 3 ½ lengths back, after leading into the stretch, while Russell Road tired to seventh in his 10-year-old debut.

One race earlier on the card, Candy Man’s Girl, ridden by Antonio Lopez, led throughout to capture the $50,000 Original Gold Stakes, a “Win & You’re In” race for the Cavada on WVBC night. A four-year-old Charitable Man filly owned, bred and trained by James W. Casey, Candy Man’s Girl has won both of her starts this year and now owns eight wins from 13 lifetime outings. She has banked $175,000 along the way.

“This filly has made 13 starts and already won eight times,” said Casey, admitting that he did not know the Original Gold was a “Win & You’re In” race for the Cavada. “She missed the break last year on Classics night and was far behind early and came running late. I think she would have won if she had a good start that night. Three jumps past the wire she was in front [of winner Navy Ribbon].”

Candy Man’s Girl settled for third on WVBC night last year, but she’s won four straight since. What’s more, she’s only finished out of the money once in a baker’s dozen worth of starts.

Favored Red Hot Diva saved ground throughout and appeared to have dead aim on Candy Man’s Girl on the far turn, but she never found room and settled for runner-up honors in her seasonal debut. The runner-up in last year’s Cavada, Red Hot Diva will likely have several more chances to redeem herself this summer and fall before the main event for state-bred distaffers in October.

Candy Man’s Girl is a daughter of Charitable Man and is out of the productive Yankee Victor mare Candy One, who also was the dam of Original Gold seventh-place finisher Lucky Candy. Among Candy One’s other offspring: the ultra-hard-hitting sprinter Greenway Court, who won the 4 ½ furlong Dash for Cash on the 2015 WVBC card, giving him 15 career wins and is training towards a ’16 debut.

Two races prior to the Original Gold, Bullets Fever (Bocachica up) lived up to his role as the 4-5 choice in the $50,000 Coin Collector Stakes when he gained command soon after the break and led throughout to score by five lengths in 51.82. A three-year-old Fiber Sonde colt trained by Jeff Runco for owner David Raim, Bullets Fever has now won all four of his lifetime starts and banked over $140,000. Bred by John McKee of Rachel’s Turn fame, Bullets Fever is the full-brother to Hidden Canyon; their full-sister, Wizards Fever, will soon be making her two-year-old debut for Runco.

“He came back really good,” Runco said of Bullets Fever. “He’s got a lot of ability. He won the Vinnie Moscarelli in just his second lifetime start. He will probably run back here in another stakes next month, but we might try him down the road.”

“We knew she might be a little short first time back,” Cole said. “She had some knee chips removed after her last start in September and we really took our time with her coming back. It’s great to win with one of your homebreds. I am going to breed the winner of the [West Virginia] Classic one year.”