[spp title=”She’s made our world a better place.”]

“She’s made our world a better place.”

Ina Stanco, Ed’s wife, stands in the paddock. She’s petite, and the throngs of people trying to get a look at her filly being saddled completely block her view of her horse and her husband.  It was Ed who introduced her to racing.

“I can remember coming to the races when we were newlyweds,” she says. Thinking about other big races, particularly the Kentucky Oaks, she says, “Totally different. This one? This one’s been Ed’s dream from Day 1, so I really want her to win for him. And for Todd.

“I’m very nervous. I know she can do it, I have confidence in her, but I’m anxious. I just want it over. He’s wanted this, and it’s been his dream forever.

“Even if she doesn’t do it, she’s made our world a better place. We love her.”

As they did four weeks earlier after the Coaching Club American Oaks, cries of “Ed-die! Ed-die! Ed-die!” ring through the clubhouse and down into the winner’s circle. In this moment, as he takes his place next to his filly, he chants, “Ja-vy, Ja-vy,” celebrating the jockey who’s ridden Princess of Sylmar in three of her nine victories.

Granddaughter Avery smiles. “It feels good, awesome. I didn’t bet on her because I heard it’s going to be not much money that you get back. I knew before she started she was going to win.”

Her younger sister Bella chimes in shyly, “She smiled at me before the last race.” “She” is Princess of Sylmar.

Now, in demand again and with the nerve-wracking part of the day behind him, Stanco is loose, talking with everyone who approaches him.

“It’s the best. What can I say? I want to see the replay. Did he ever touch her? I thought when I was watching through the binoculars and she was right there at the beginning of the turn, I thought she just wanted the whole thing—she was sprinting away and I thought, ‘Oh my God, she’s going right now.’

“And then I thought on the backstretch she was going then. And then it was just an explosion. 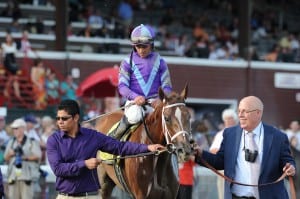 All’s right with the world. Ed Stanco leads the Princess into the winner’s circle after the Alabama. Photo NYRA/Adam Coglianese.

“I could see how full she was, relative to how the others were going. But you never know, right? I thought, “My God, you’re going to go at the top of the turn? You got a long way to go.’”

Now that it’s over, he admits to the nervousness that had lingered all day.

“Midday,” he says, “I was weak. At 4 or 5 o’clock, I had very weak knees and it was hard for me to walk around. Once I saw her in the paddock, all that disappeared.

“And my partners—they’re the best. They really love this and we’ve had such a great day and it’s been wonderful.

And those “Ed-die, Ed-die” chants?  “Those are my lunatic kids and their friends.”