Algeo: “Bit of the blarney” key in music, on Racing Commission 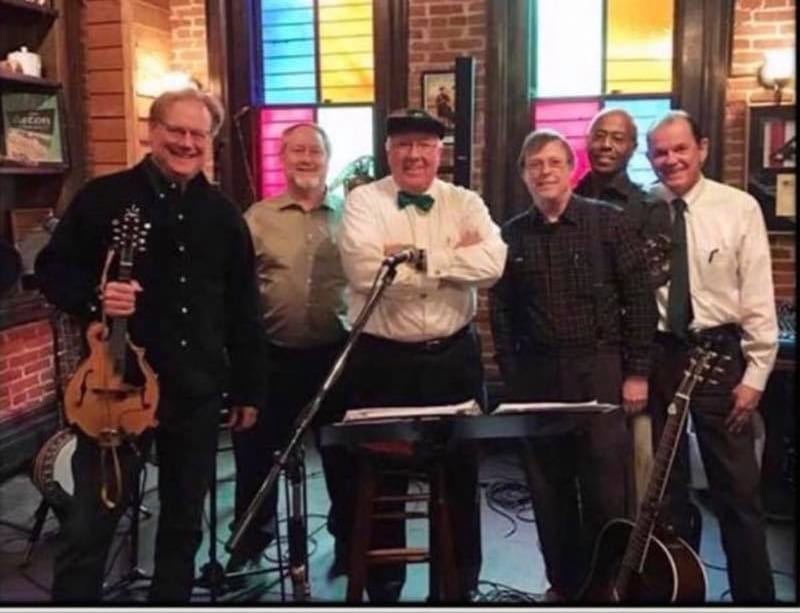 Come out ye Black and Tans, come out and fight me like a man,
Show your wife how you won medals down in Flanders,
Tell them how the IRA made you run like hell away
From the green and lovely lanes of Killashandra.
— from Come Out, Ye Black and Tans, by Dominic Behan

As band names go, calling a group playing traditional Irish music – including plenty of rebel songs — The Black and Tan Band may not be the most unlikely moniker. But it’s close.

The rebel tunes urged the Irish to expel the English and reclaim their native land. Conversely, the Black and Tans – formally, the Royal Irish Constabulary Special Reserve – were an often brutal force of “temporary constables” formed in 1919 to assist the British in putting down the Irish rebellion.

“We get a lot of blowback from that,” says Michael Algeo, who cofounded the band with his colleague Eric Johnson. “Black and Tan is not a positive term.”

But, when Algeo, whose parents immigrated to the United States from Ireland’s County Donegal, started the group with his colleague, Eric Johnson – who is African-American – well, the name suddenly made a lot of sense to both men.

And it’s the kind of unexpected plot twist increasingly common in Algeo’s life. The man who sings the auld tunes by night is a buttoned-up lawyer (and former circuit and district court judge) by day. And he doubles as chairman of the Maryland Racing Commission, a position to which he was named pretty much out of left field.

“The immediate reaction in the industry was, what the heck is going on, and who the hell is this guy?” Algeo says with a chuckle.

Algeo had no particular racing background when Gov. Larry Hogan (R) nominated him to the Commission chairmanship. But he’s been working hard to get caught up in an industry that’s often difficult for newcomers to get a handle on.

“It’s been a whirlwind, but I love it,” he says, ticking off different racing events he’s attended.

At the Preakness, he says he “was like a kid in a candy store at Christmas.” Maryland’s Horse Industry Day – a lobbying event in Annapolis – was “incredibly impressive.”

Overall, “It’s exciting,” he says. “It continues to look like things are progressing well.”

As you can see, Algeo’s a positive guy. But he’s Irish, too, so his positivity is tempered with realism, not to say fatalism.

“The Maryland horse industry has just taken off in the last few years,” he says. “I have no idea how long I will stay in this position, but my goal is, I don’t want things to turn in the other direction on my watch.”

While the industry has made a dramatic turnaround in recent years, there’s still work to be done. The influx of new stallions to Maryland has industry insiders fretting about the dearth of mares to send to them. And then there’s the question of Pimlico’s future; Algeo says that he recently signed the memorandum of understanding for the Maryland Stadium Authority to embark on Phase 2 of its study on what to do about Old Hilltop.

“It’s going to be really interesting to see where that goes,” he says, in understatement. Algeo says that he expects phase two to be complete before the end of 2018; that would be just in time for the legislature to dig into the issue during its 2019 session.

Another step the Commission has taken under Algeo’s watch is the formation of an ad hoc committee to analyze and discuss the future of Maryland’s horse industry. The idea behind that committee, which is chaired by commissioner Tom Bowman and includes past Commission chairs John McDaniel and Bruce Quade, is for the Commission, as well as the industry as a whole, to identify future problems and opportunities before they arrive.

And by night, there’s the music.

“We grew up with the Irish music,” he recalls. “My father used to play the Irish-American Hour on the radio. Our house was alive with Irish music.”

Along with the rebel tunes – “a lot of the Clancy Brothers,” he says – The Black and Tan Band also incorporates “a fair number of ballads, like Fields of Athenry and Danny Boy,” as well as some John Denver and some rock ‘n’ roll.

Algeo plays guitar and sings for the six-person group, all of whom, like Algeo, work at the Montgomery County Courthouse in one capacity or another.

“The whole crowd of us have known each other for almost 30 years,” he says. “It started just as kind of a fun thing, and then word got out.”

The group had a gig last week and has another, at a fundraiser, at Galway Bay, an Irish pub in Annapolis, at 5:30 p.m. on March 15.

They may seem like disparate pursuits, but in the end, Algeo thinks his musical side – and more importantly, his Irish heritage – actually do help in his role as chairman of the Maryland Racing Commission.

“You need a little bit of the blarney to be chairman of the Racing Commission,” he says with a laugh. “I think my Irish roots have served me well.”