Preakness Past: Funny Cide and his merry band 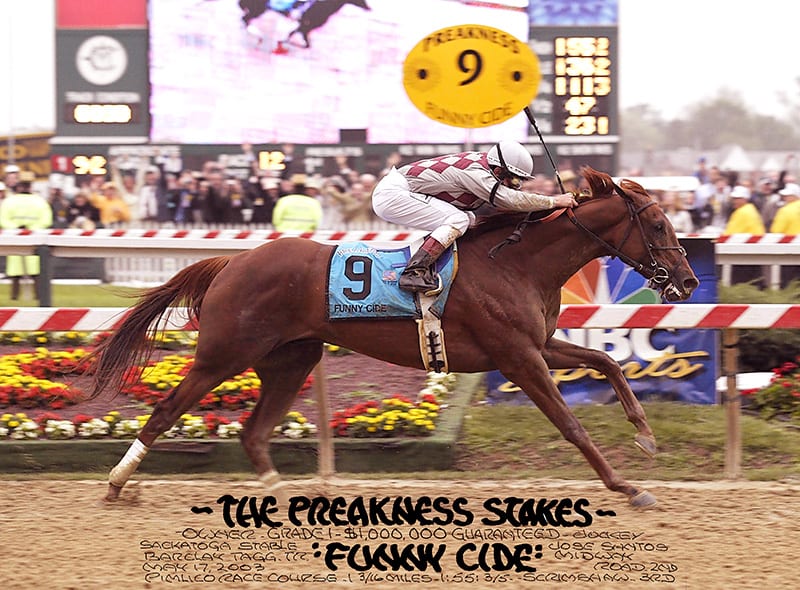 Our 2018 Ghosts of Preakness Past will feature stories of eight editions of the Preakness from the last 40 years. Today, 2003 and Funny Cide, the gelding who captured the nation’s affection.

The sport of horse racing is often referred to as the “Sport of Kings.” The pageantry, money, thrills, and celebration that go into it are certainly fit for royalty, but the experience of glory isn’t exclusive to those already on top. Every so often, an underdog will come along to remind the world that in this sport, anything can still happen. And that is exactly what the gelding Funny Cide and his band of blue-collar owners did in 2003.

A rowdy group made up of ten friends joined together to form Sackatoga Stable. They hired Barclay Tagg to train their stable of horses in 1999, and found a decent amount of success with claiming thoroughbreds for modest prices. The partnership had fun on the lower end of the sport, but when they came across a big red horse, known as Funny Cide, everything changed.

Funny Cide took his connections on the ride of a lifetime from the very beginning, showing obvious signs of talent when he annihilated his competition by nearly 15 lengths in his debut. The crimson-colored New York-bred then picked up wins in the Bertram F. Bongard Stakes and Sleepy Hollow Stakes, ending his two-year-old season with an undefeated record.

Funny Cide kicked off his three-year-old campaign in the Holy Bull Stakes, but was left tasting defeat for the first time at the hands of a difficult trip. Funny Cide could do no better than fifth on that January day, but he delivered two improved efforts when third in the Louisiana Derby and second in the Wood Memorial, proving that he belonged in the “Run for the Roses.”

Still, Funny Cide came into the Kentucky Derby a little under the radar, the public more focused on the regally bred Wood Memorial winner Empire Maker. Funny Cide went off at odds of 12-1 but proved the bettors wrong, powering home to win by over a length in a sharp time of 2:01.19. He thus became the first gelding to wear the roses since Clyde Van Dusen in, 1929.

In the wake of the Kentucky Derby, Jose Santos, the pilot of Funny Cide, was wrongfully accused of shocking his mount with an electrical device in order to make the gelding run faster. The rider was eventually cleared of the allegations, but he still came into the Preakness Stakes with the need to prove that he and his horse were honest and deserving winners. Nobody could have predicted it at the time, but Funny Cide was about to turn their unjust situation into something straight out of the silver screen. The gelding wasn’t just going to win the Preakness Stakes. He was going to turn it into an exhibition.

When the gates opened for the Preakness Stakes, Funny Cide quickly settled in just behind the pace-setters in third. From the start it was clear that he was eager to get going, leaving Santos with no choice but to hold him back with all his might. Funny Cide was desperate to flaunt his speed, but the rider knew better. He would have his moment to shine when they hit the stretch.

Funny Cide could hold back no more when the final bend rolled into view. The moment was right, and Santos released the beast that was charging beneath him. Funny Cide unleashed a startling burst of speed that grew with every stride. In the blink of an eye, the Kentucky Derby winner was in front, disappearing from his rivals as he hightailed it into the stretch.

The delighted crowd at Pimlico cheered him on as he extended his lead to five lengths, then six, then seven, and he didn’t stop there. Funny Cide continued his epic march to glory until he reached a stunning 9 ½-length advantage. The gelding romped over the finish line unmatched by all, recording the second largest margin of victory since Survivor won the inaugural Preakness in 1873.

In a triumphant moment of joy, Santos rose in the irons and held out his hand before the crowd as his steed dashed over the wire, revealing that their score was achieved through talent and heart alone, and not through the aid of a machine.

“The only machine I had was the horse that was carrying me, the big red machine” Santos would later tell The New York Times.

Funny Cide’s Preakness victory was especially sweet for Barclay Tagg, who had started off his career conditioning horses in Maryland. The trainer spent 30 years working in the state, but had never started a single horse in Maryland’s greatest race. But now, thanks to Funny Cide, Tagg was on the center stage of where his journey began.

“I never had anything but faith in the horse,” Tagg told The New York Times after the race.

It was a faith that would remain unshaken for the remainder of the gelding’s career.

Three weeks later, Funny Cide set off over an ocean of mud in the Belmont Stakes, attempting to become the first gelding in history to win the elusive Triple Crown. After setting the pace for the majority of the race, he gave in to exhaustion in the stretch. Funny Cide began to fade, leaving the crowd at Belmont Park in a tizzy of disappointment as Kentucky Derby runner-up Empire Maker stole the show and left Funny Cide behind in third, ending his bid for the Triple Crown.

But although Empire Maker won the prize, it was Funny Cide, who received a standing ovation. The gelding’s rags to riches story had captivated the nation in such a way that even in defeat, he was still hailed as a hero.

Though many fans, and even people in the industry, were left dismayed as the Triple Crown drought reached 25 years, one man who was not disappointed was Funny Cide’s main owner, Jack Knowlton.

“How can you be sad?” Knowlton remarked to the Daily Racing Form. “What a run. What a run. We never thought we’d be here. We weren’t supposed to be here. He still won two-thirds of the Triple Crown, and third in the Belmont Stakes is not too shabby for a New York-bred.”

Funny Cide retired four years after his Triple Crown bid, ending his career in 2007 after one final victory, in the Wadsworth Memorial Handicap at Finger Lakes. He closed out his racing days with 11 wins in 38 starts, and total career earnings of $3,529,412. Funny Cide then became a faithful stable pony for Tagg, before retiring officially in 2008 to his current home at the Kentucky Horse Park near Lexington, KY.