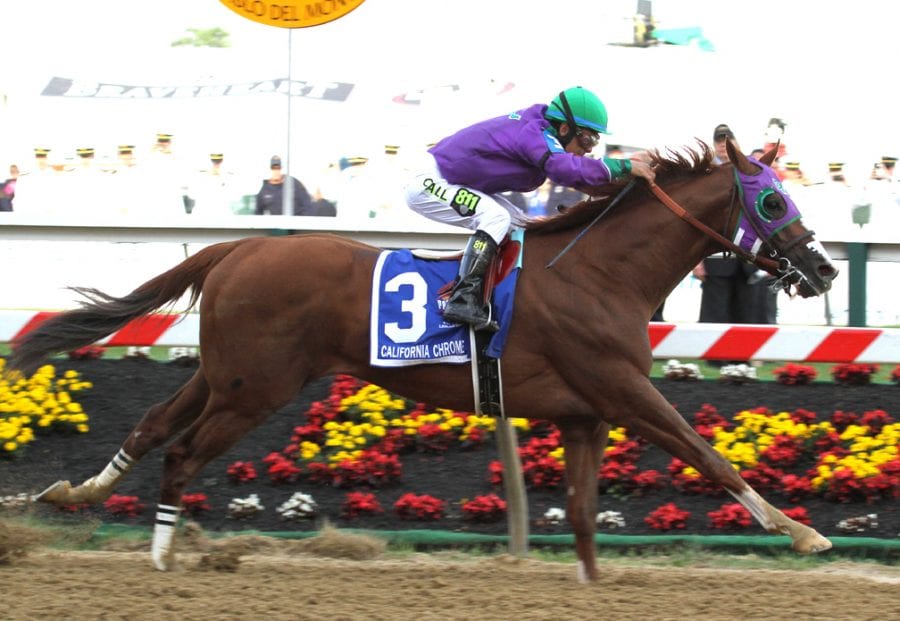 California Chrome at the 2014 Preakness. Photo by Laurie Asseo.

The National Thoroughbred Racing Association (NTRA) today announced that California Chrome’s win in the Dubai World Cup has been named the 2016 NTRA Moment of the Year based on the results of a record 2,817 votes cast via Twitter and an online poll.

California Chrome became North America’s all-time earnings leader with his win in the world’s richest race, the $10 million Dubai World Cup, at Meydan Racecourse. The $6 million winner’s share pushed his career bankroll to $12,532,650, surpassing Curlin’s previous mark. The winning margin was 3 3/4 lengths but might have been even wider had Espinoza not felt his saddle slipping out from underneath him in the stretch.

The 2016 Moment of the Year trophy is a crystal timepiece set to 9:12 p.m. Gulf Standard Time, the moment when California Chrome crossed the wire in the United Arab Emirates.

NTRA Moment of the Year voters chose from 14 images illustrating a range of human emotions as well as outstanding displays of equine athleticism. Finishing second was Beholder and Songbird’s epic stretch duel in the Longines Breeders’ Cup Distaff at Santa Anita Park.

“The fact that the public voted overwhelmingly for a moment that received limited media exposure in the United States demonstrates how passionate Thoroughbred racing fans are,” said Keith Chamblin, NTRA Chief Operating Officer. “This result is a surprise only to those that underestimate the power of a superstar like California Chrome.”

This is the third straight Moment of the Year that has included Espinoza, who rode California Chrome in his Kentucky Derby win of 2014 and piloted American Pharoah for a Triple Crown-clinching Belmont Stakes score in 2015.

The first-ever NTRA Moment of the Year was the touching scene between Charismatic and jockey Chris Antley following the 1999 Belmont Stakes. The next year’s winner was the stretch run of the 2000 Breeders’ Cup Classic, which saw Tiznow hold on for a dramatic victory against Giant’s Causeway. Tiznow won again the following year as fans selected his stirring repeat victory in the Classic over Sakhee.

In 2002, fans cited the passing of the last living Triple Crown winner, Seattle Slew. In 2003, the popular Kentucky Derby win by Funny Cide was selected. Birdstone’s upset win in the Belmont Stakes over Smarty Jones took down top honors for 2004. In 2005, fans selected Afleet Alex’s spectacular victory in the 2005 Preakness Stakes.

Voters in 2006 chose Barbaro’s gallant struggle to recover from his Preakness injury while at the New Bolton Center. The 2007 Moment of the Year was a historic victory by filly Rags to Riches over Curlin in the Belmont Stakes. In 2008, it was Zenyatta’s win in the Breeders’ Cup Ladies’ Classic. Zenyatta “repeated” in 2009 as fans selected her triumph in the Breeders’ Cup Classic.

In 2010, fans selected Blame’s narrow Breeders’ Cup Classic victory over Zenyatta. Drosselmeyer’s hard-fought win over Game on Dude in the Breeders’ Cup Classic was the public’s choice for 2011. For 2012, the recovery of Paynter from near-deadly battles with laminitis and colitis captured the hearts of voters like no other story. In 2013, fans recognized Mucho Macho Man’s nose victory in the $5 million Breeders’ Cup Classic for his popular connections. The 2014 award went to California Chrome’s dominant win in Kentucky Derby 140. Last year’s vote resulted in a landslide for American Pharoah’s historic Triple Crown-clinching Belmont Stakes win.