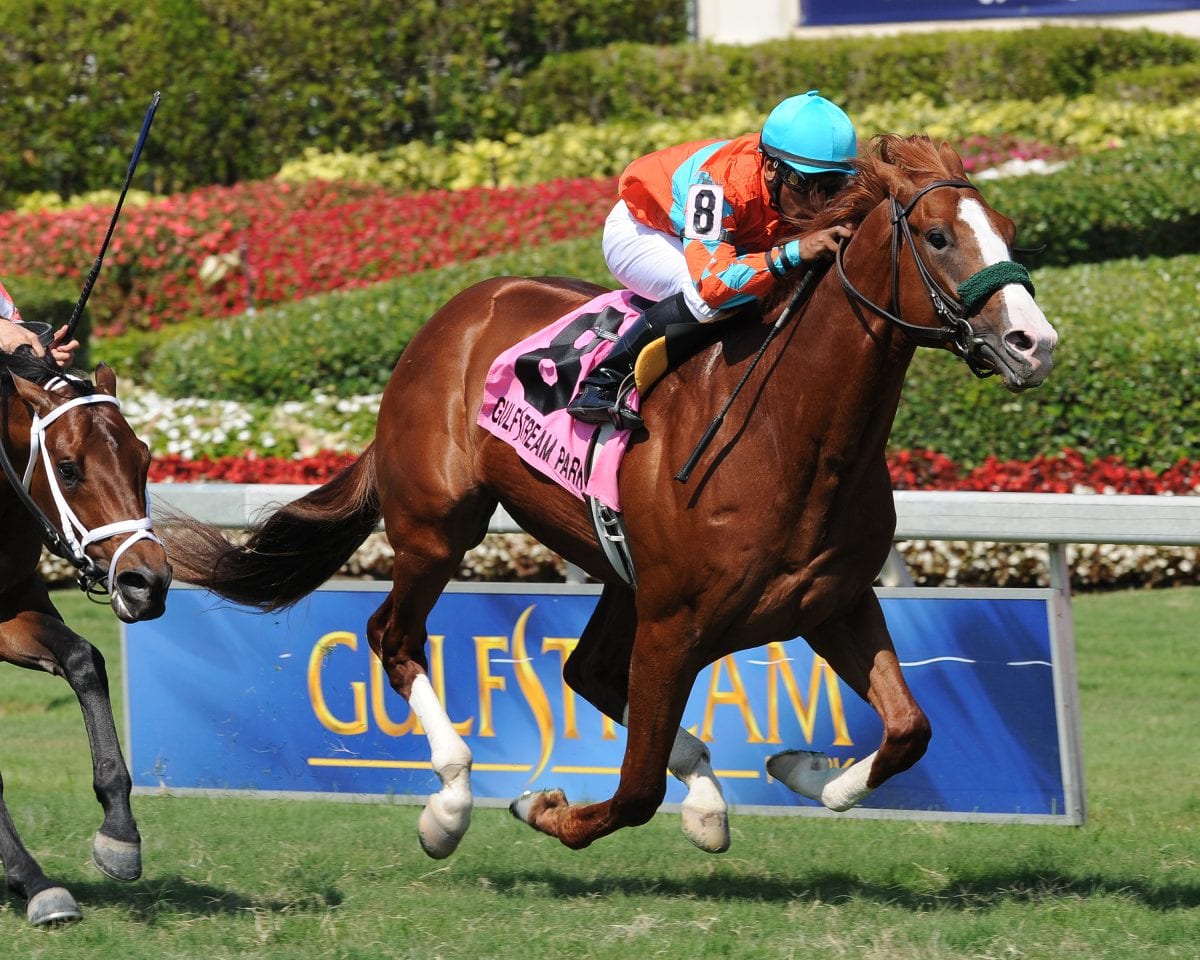 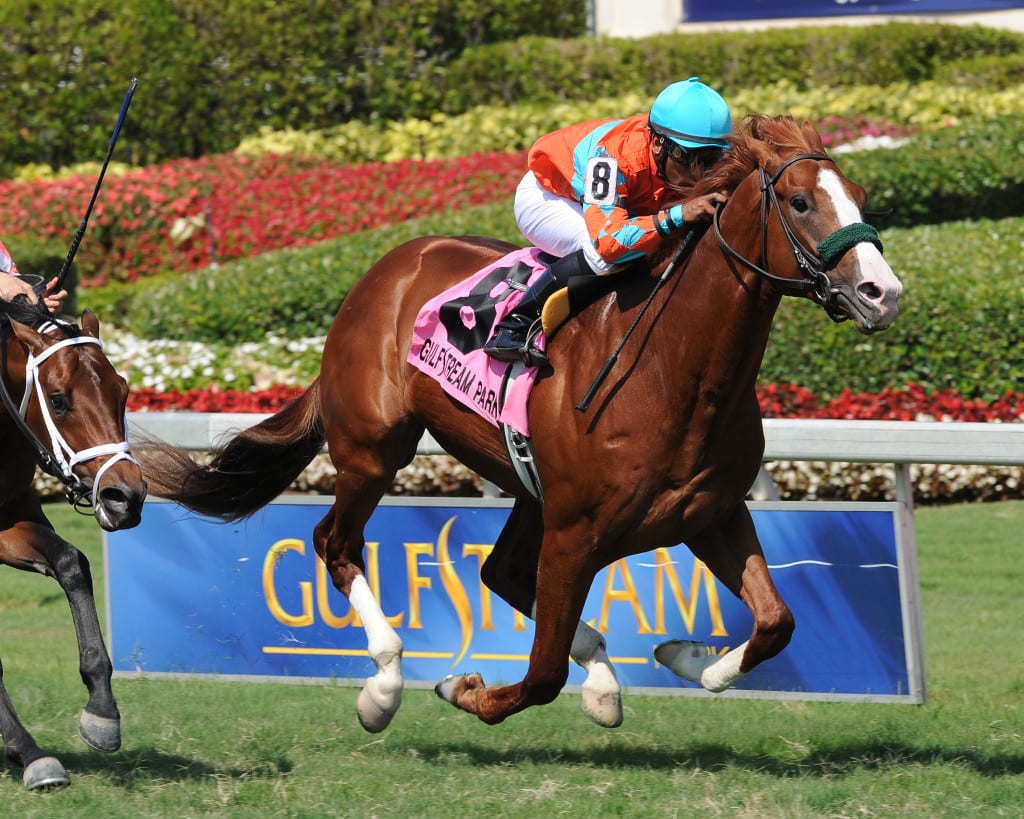 Richard Santulli’s Force the Pass is on a quest to reestablish himself as the premier 3-year-old turf horse in North America Saturday in the $400,000 Commonwealth Derby (G2) at Laurel Park.

The Grade 1 stakes winner topped a field of eight 3-year-olds entered Wednesday for the 1 1/8-mile turf stakes that will be co-featured on a 10-race program with the $250,000 Commonwealth Cup (G2).

On the strength of sensational back-to-back stakes victories, the son of Speightstown went to post for the Secretariat (G1) Aug. 15 as the 3-2 favorite, only to break in air and trail the seven-horse field for the first six furlongs of the 1 ¼-mile stakes for 3-year-olds. He rallied to finish third, 5 ½ lengths behind victorious European shipper Highland Reel and a head behind runner-up Closing Bell.

“It was a heartbreaker,” trainer Alan Goldberg said. “He got all jazzed up with that (stormy) weather, he lunged at the break. We thought we’d be second or on the lead early. We didn’t expect to be that far back. Everything went wrong that day. Hopefully, at Laurel, everything will go the right way.”

Goldberg reported that Force the Pass was a little tired for a few days upon returning home to Colts Neck Stables. The homebred colt signaled his readiness to resume his winning ways Tuesday with a 47-second half-mile on turf at the Colts Neck, N.J. training center.

Prior to his unfortunate start at Arlington, Force the Pass had captured the Penn Mile (G3) May 30 and the Belmont Derby (G1) July 4. At Penn National, he lacked running room until deep stretch, surging from eighth in deep stretch to prevail by a head. He had an easier time of things at Belmont Park while closely stalking the pace before going to the lead with three-eighths of a mile to go in the 1 ¼-mile stakes and drawing off to win by 3 ¾ lengths under regular rider Joel Rosario.

Trevor McCarthy has picked up the Commonwealth Derby mount from Rosario, who has a commitment to ride Frosted in Saturday’s Pennsylvania Derby (G2).

Prior to his third-place finish in the Secretariat last time out, Force the Pass had finished no worse than second in the first six starts of his career. After finishing a late-closing second in his debut Feb. 14 at Gulfstream, he won his next two races during the Hallandale, FL track’s Championship Meet, including the Cutler Bay Stakes. He went on to finish a troubled second in the James Murphy Stakes at Pimlico May 16 prior to his back-to-back graded-stakes wins.

“I had a plan for him this year, and we’ve been lucky enough to make all the races,” said Goldberg, whose turf star is scheduled to ship from Colts Neck Stables to Laurel Saturday morning. “Everything’s been really good.”

Force the Pass is an imposing foe in the Commonwealth Derby, which is presented by the Virginia Equine Alliance at Laurel Park, but the Bill Mott-trained Go Around rates as a formidable rival for Force the Pass, looking to his third-place finish in the Saranac (G3) at Saratoga Sept. 5. Peter Vegso’s homebred circled the field with a six-wide sweep on the final turn to move from eighth to challenge for the lead at the top of the stretch, only to weaken late. The son of Medaglia d’Oro previously captured an entry-level allowance at Belmont Park.  Vegso runners have won three previous runnings of this event when contested as the Virginia Derby and run at Colonial Downs.

David Donk-trained Vision Perfect, seventh due to a wide trip in the Saranac last time out, brings a resume with a pair of stakes victories into the Commonwealth Derby. Robert Spiegel’s homebred son of Pollard’s Vision, who captured the Awad Stakes at Belmont last October, debuted in 2015 with a triumph in the Woodhaven Stakes at Aqueduct in April.

Campbell Wilson-trained Majestic Pride, a multiple stakes-placed colt on dirt last year, showed an affinity for the Laurel turf course last November while finishing a photo-finish second in an optional claiming allowance. The son of Artie Schiller has an allowance victory at Canterbury and a third-place finish in an optional claiming allowance at Penn National to his credit in his other two turf starts.

Pavel Matejka-trained One Go All Go, who was beaten by a neck in a third-place finish in last year’s Arlington Washington Futurity (G3), most recently finished first at Indiana Downs in his turf debut, only to be disqualified and placed second.

Matthew Schera’s Great Dancer, who is trained by James Lawrence II, and William Lawrence and Klaravich Stables’ Fundamental, both captured 1 1/8-mile entry-level allowance races on turf at Saratoga in their respective last starts.