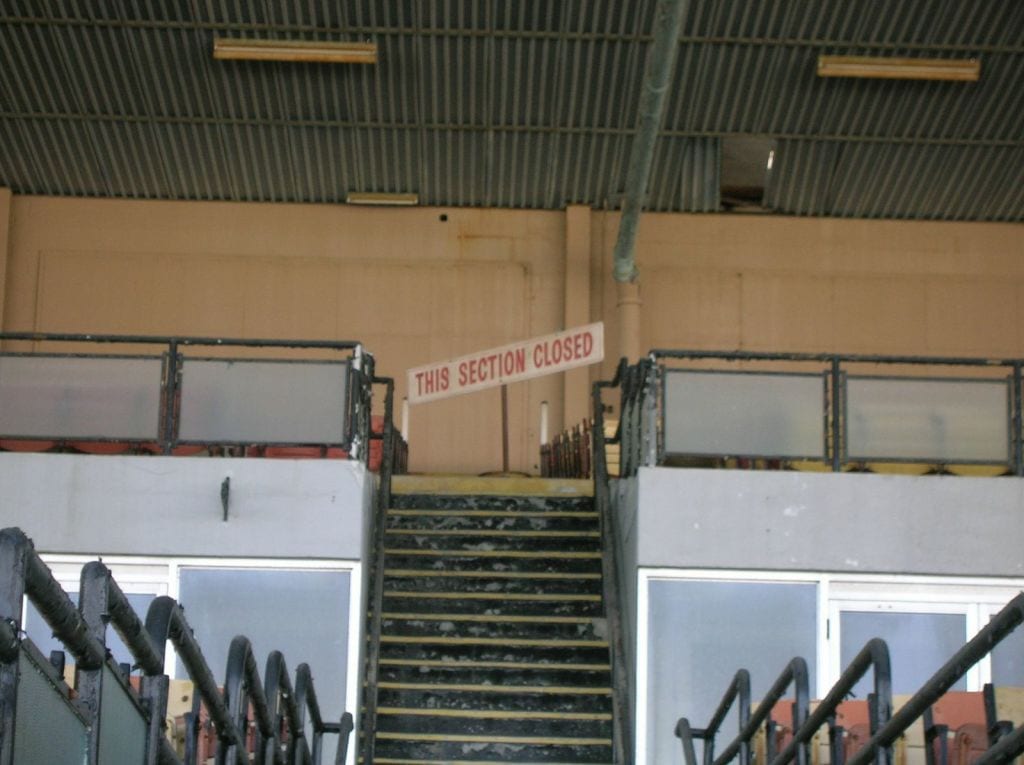 Parts of the ACRC grandstand were closed for years.  Now all of it is. Photo by Teresa Genaro.

Today in Racing History is an occasional feature focusing on some of racing history’s interesting, important, or unusual events.  Atlantic City Race Course’s closure yesterday caused our correspondent to think about the track’s storied past.

For those of us who visited this classic racing venue, fun and excitement often ensued watching great evening turf racing under the lights while cooled by an ocean breeze.  Innovative promotions which took place here included live professional boxing and professional wrestling between races, simulcasting (the first of its kind) from the Meadowlands, and the novel Matchmaker Stakes offering the services of prominent sires to the top finishers.  Even when the quality of the racing declined with the advent of casino gambling 12 miles to the east, racing remained interesting and competitive on the lush turf course.

The track opened on July 22, 1946 before 28,000 fans, the largest inaugural day racetrack crowd in history. Among those in attendance were track shareholders Frank Sinatra and Bob Hope, as well as  Princess Grace of Monaco. Princess Grace was the daughter of John B. Kelly, the track president and one of the four businessmen who founded it.

The United Nations, Jersey Derby, Matchmaker and the Jersey Shore stakes are all prominent races now run at Monmouth that originated at Atlantic City.  Kelso made his two-year-old debut at Atlantic City.  Julie Krone was a leading rider there early in her career.  Dinner at the defunct Zaberer’s and Club House restaurants were part of the experience.  Many regulars would attend daytime races in Maryland, Delaware, Pennsylvania and North Jersey and complete the day in Atlantic City that evening with perhaps a nightcap at Resorts International.   In 1987 a large part of the property was siphoned off to make way for the Hamilton Mall.    Today the remainder of property closes to Thoroughbred racing.  Another sad day for horse racing.