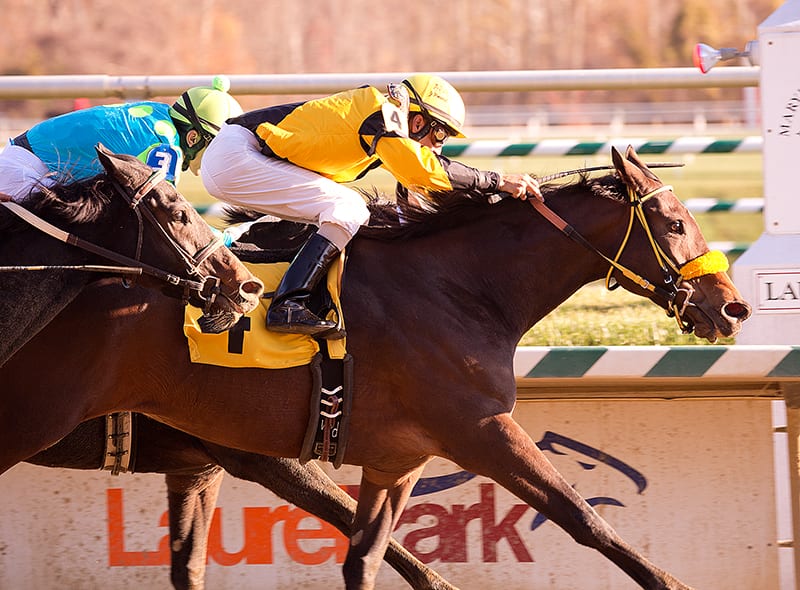 The field for Saturday’s $300,000 Barbara Fritchie Handicap (G2) at Laurel Park is significantly different than the one originally scheduled to race last Saturday. Four of filly and mare sprinters will not be competing this weekend, while another has been added into the mix.

Parx Racing-based Winning Image and Villette are not permitted to leave the Philadelphia track due to a quarantine after an equine herpes outbreak. More Than a Cruise will be pointed to the Conniver Stakes at Laurel on March 22, a race where she finished second a year ago. Trainer Charlie Williams decided against running longshot Sunlit City.

The seven remaining runners all have a legitimate shot to win the 60th running of the storied Fritchie.

The new edition to the field is Merry Meadow (6-1). The speedy daughter of Henny Hughes has finished in the money in 17 of her 18 career starts, including an allowance victory at Aqueduct earlier this month. Forest Boyce will ride for trainer Mark Hennig.

“The quarantine at Parx made me look at the race since it isn’t as tough as it was a week ago,” Hennig said. “It took her awhile to break her maiden (11th career race) but she always ran hard. She turned the corner mentally last summer when she won that first race. She has also filled out and has changed a lot physically since last year at this time. She is a blue-collar kind of filly. She gives 100 percent every time, which is kind of unique.”

After finishing off the board in her debut, La Verdad has reeled off five straight front-running victories, four against optional claiming company at the New York tracks. Jose Ortiz has been aboard the Yes It’s True filly in all her starts for trainer Linda Rice.

“We are ready to try stakes company and the timing is right,” Rice said. “She is a big filly with a lot of natural speed. We were hoping to rate her off the pace last time but it didn’t work out. We’ll see how she does with the added distance.”

An early resume in claiming races made Centrique (2-1) eligible for the Claiming Crown Glass Slipper at Gulfsteam Park, a race she won as the odds-on favorite. She followed that effort with a second win at Gulfstream, this time over allowance company. The Marty Wolfson mare has finished in the money in 20-of-30 lifetime starts. Victor Carrasco has the riding assignment.

Trainer Michael Hushion has won two of the previous six Barbara Fritchie Handicaps, winning with Golden Dawn (2008) and Harissa (2011). The Belmont Park-based conditioner is sending last year’s runner-up My Wandy’s Girl (3-1) in search of another Grade 2 score. The daughter of Flower Alley, a Puerto Rican import, won her North American debut at Aqueduct in the 2012 Pentelis Stakes then she finished in the money in three graded races: Gazelle (G1), Barbara Fritchie (G2) and Ruffian (G2). After a six-month absence, she returned in December to post a fifth place finish in the Garland of Roses. Rajiv Maragh will ride for the first time.

“I still don’t understand why she didn’t run better in her first start back. She trained really well for the return. It was just a disappointing race,” Hushion said. “We took her to Florida and pointed hard for this race. She is a nice, sound filly. If she can get back to the form she showed us when we got her, we could have a lot of fun.”

Flattering Bea (15-1) won the Ms. Shenandoah Stakes at Charles Town right out of the maiden ranks and has finished first or second in seven of her last 10 starts. Her most impressive effort was a surprising, near-miss second in the Miss Preakness Stakes last spring at odds of 52-1. Crystal Pickett trains the Flatter homebred. Sheldon Russell will be aboard for the first time.

“She has been the nicest filly to train,” Pickett said. “Nothing seems to bother her. She has a great attitude. She runs her guts out every time so the key is giving her time off between races. Sheldon came to work her the last two times and she loves him. I was looking for a patient rider because she loves to have speed to run at and Sheldon fit the bill. This is certainly a step up in class but she belongs.”

Kiaran McLaughlin shipped Baragah (15-1) to Laurel from Belmont Park for her past two starts, resulting in an allowance victory in December and a fourth place finish behind Winning Image in the What A Summer Stakes on January 25 despite a troubled trip. Alex Cintron retains the mount.

“We were just unlucky in that last race. The first two finishers are really nice. We were probably third best that day but ran fourth,” said McLaughlin’s longtime assistant Artie Magnuson. “She’s improved quite a bit but we are stepping up in company. We’ll be sitting off the pace and hope to make a nice run.”

Access to Charlie (20-1) will make the final start in her career for trainer Larry Murray. The Indian Charlie mare has finished on the board in 13-of-22 starts for $251,220. She earned stakes victories in the 2011 Twixt Stakes and 2013 Geisha Stakes, both at Laurel. Julian Pimentel will ride.

“She is going to the breeding shed after this start so I am hoping to go out with a bang,” Murray said. “She has been a very productive runner. If she could be third in the Fritchie and get some graded black-type that would be perfect. She is a cut below the top horses but she has been very sound and tries every time. She has run some big races. Hopefully she can run by a few down the lane and hit the board.”

The $100,000 John B. Campbell Handicap, the co-feature on Saturday, drew a field of five older runners.