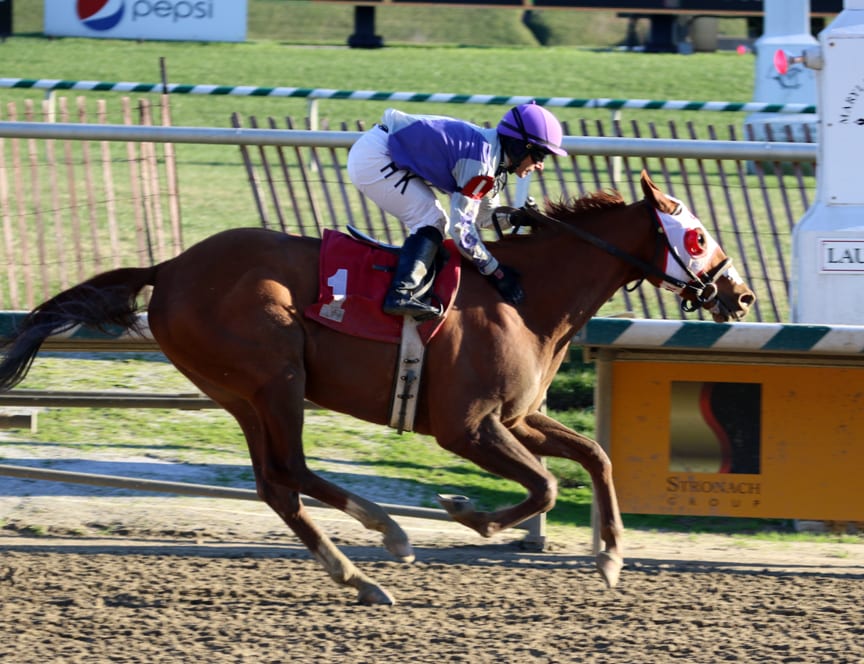 When the connections of Page McKenney saw the overnight for Aug. 25 at Parx Racing and the field for the $100,000 Sal DeBunda President’s Cup, they knew the 8-year-old gelding had won his MATCH Series division.

Majority owner Adam Staple and trainer Mary Eppler regularly follow series developments and are well aware of how important the minimum number of starts is to qualify for bonus money. The popular Pennsylvania-bred had raced in the first three legs of the 3-Year-Olds and Up Long–Dirt Division with success — a win, a second and a third — but no other horse will have enough MATCH Series starts to qualify for the prize money in the division.

Page McKenney is one of six entered in the 1 1/8-mile President’s Cup on the Saturday program as Parx reopens after a brief August break. He is seven-for-10 at Parx with multiple stakes victories and is listed as the 2-1 morning-line favorite under regular rider Horacio Karamanos.

“We keep close track of the series,” Staple said. “We knew when we saw the entries he won (the division title). He’s getting older, and having a MATCH Series division title is a nice feather in his cap.”

Page McKenney, who has earned $1,905,940 in 52 starts, currently has 22 points and is tied for second with three other horses in various divisions in the overall MATCH standings. Laki, who has started in the four 3-Year-Olds and Up Sprint–Dirt Division legs run thus far, has the lead with 23 points.

The only other horse that has started in the first four legs of a division is Oak Bluffs, also trained by Eppler. The 8-year-old New Jersey-bred gelding has 22 points and currently leads a contentious 3-Year-Olds and Up Sprint–Turf Division, which will conclude Sept. 15 with the $100,000 Laurel Turf Dash.

Page McKenney, well-traveled around the Mid-Atlantic region, hadn’t raced at Monmouth Park until this year. In his three MATCH Series starts there, he won the grade II Salvator Mile, finished second in the grade III Philip H. Iselin Stakes and third in the grade III Monmouth Cup. He would earn 5 bonus points on top of points earned for finish position in the President’s Cup.

Page McKenny is the second horse to claim a division title. Sycamore Racing V’s Jessica Krupnick, by virtue of a strong third-place finish in the $100,000 Satin and Lace Stakes at Presque Isle Downs & Casino Aug. 20 for trainer Francis “Tres” Abbott III, sealed the top spot in the Filly and Mare Sprint–Dirt Division and with 22 points is in contention for the overall prize.

Eppler said she had a feeling Pimlico Race Course-based Page McKenney could win the division title before the fourth leg given the fact the remaining eligible horses would have to start in both the President’s Cup and the Sept. 16 Presque Isle Mile to qualify for bonus money. Several of them were nominated to the President’s Cup but also other distance stakes in the area; three are nominated to the grade I Woodward Stakes at Saratoga Race Course in late August.

One of the horses that was nominated to the President’s Cup, Parx-based Zanotti, who finished a close second in the Monmouth Cup, is nominated to the Woodward and the grade 3, 1 1/2-mile Greenwood Cup at Parx Sept. 3. Marshall Graham of Ten Strike Racing, which owns Parx-based Zanotti, said he appreciates the MATCH Series and would like to have had more horses to participate, but it didn’t pan out this year.

Page McKenney was claimed for $16,000 in July 2013 at Hollywood Casino at Penn National Race Course from his breeders, James Bryant and Linda Davis, who then rejoined the team as co-owners through Jalin Stable. Page McKenney will be the leading Pennsylvania-bred male in the overall MATCH Series by points, so his breeders will earn a $5,000 bonus provided by the Pennsylvania Horse Breeders Association.

Of Page McKenney’s 22 victories, 15 have come in stakes–graded, open, and state-bred.

“If you look at it, a lot of horses in the Mid-Atlantic who have gone on to be stakes horses raced in at least one claiming race,” Staple said, “and we’ve been very fortunate to have a horse like Page McKenney.”