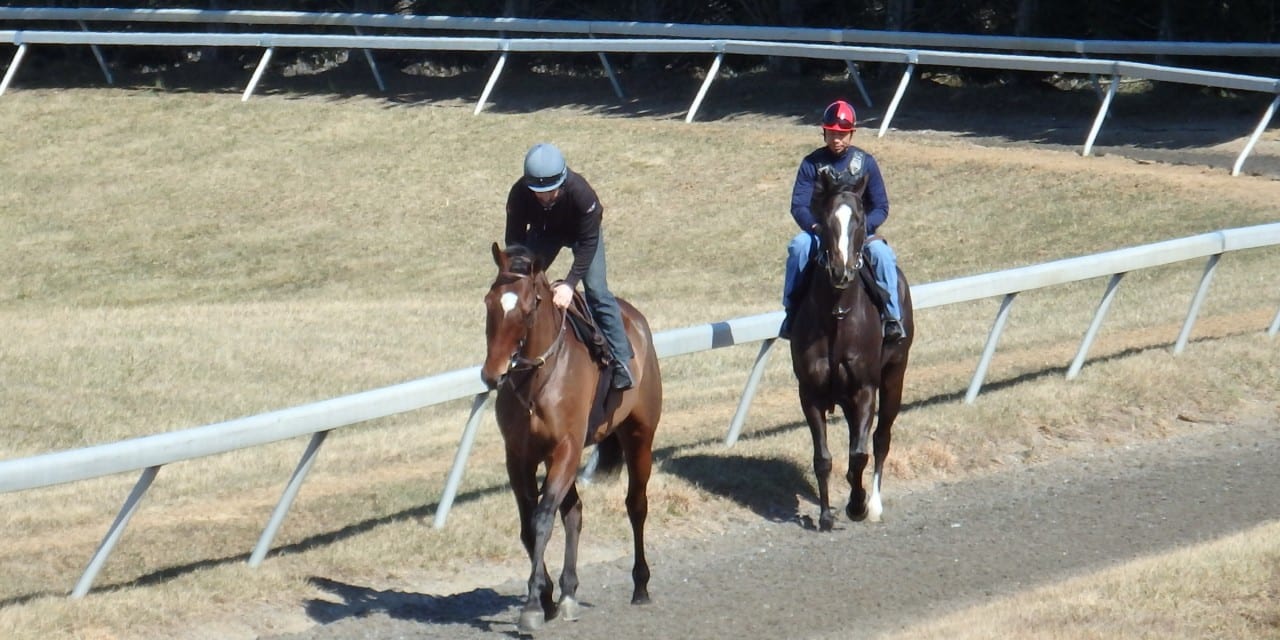 Those looking for the madness — or the genius — animating “mad genius” Michael Dickinson need only visit 250 rolling acres near North East, Maryland.

There, Dickinson has spent an amount of money which he won’t disclose — but is clearly considerable — to turn his Tapeta Farm into a showplace, and a showcase, for his innovative approach to training Thoroughbreds.

Now all he needs are some horses.

Dickinson, 66, has 10 horses on the grounds now and stalls for 30 more.  And not just any horses, either.

“My goal is to fill this barn with good horses,” he says.  “We can’t afford to have bad horses here.”

It’s been over eight years since Dickinson trained a horse in a race, but if all goes according to plan, it won’t have been time wasted.

“The time off wasn’t really a hiatus,” says Michelle Hamrick, his onetime exercise rider who now serves as his personal assistant.  “He was using it productively.”

The result, which Dickinson unveiled to a dozen or so media members on a postcard day March 1, is a bevy of improvements to his Tapeta Farm.  Dickinson plans to train and race horses off the farm, obtaining just a couple of stalls at Delaware Park for the purpose of acclimating horses to the racetrack.

“When I gave up training, I had no intention of training again,” Dickinson explains, “but I got all these ideas.”

Ideas are a kind of currency for Dickinson, a native of Yorkshire, England.  Some, like his invention of the synthetic Tapeta surface, used on the farm’s main track, are grand in scale; others, such as the herbal remedy he provides his horses, smaller.  All, he hopes, will lead to one place: the winner’s circle. 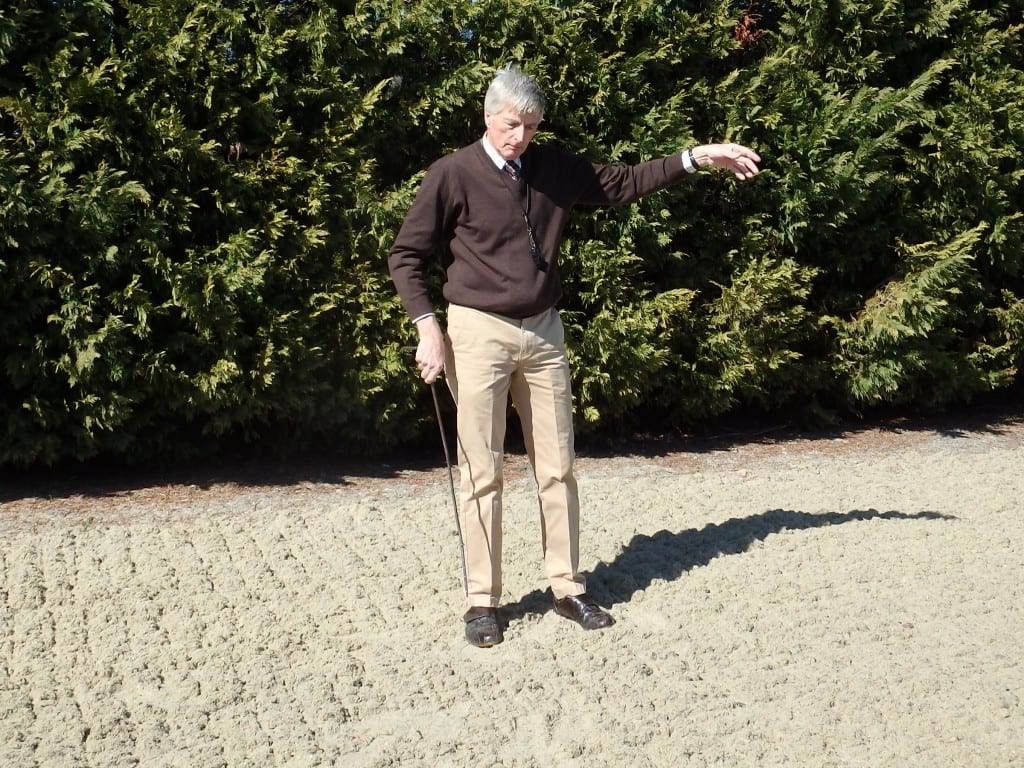 “We must embrace common sense and madness,” he wrote in a note.  But where do you draw the line?

Dickinson’s success, perhaps, comes from his willingness to cross the place that most trainers see as the boundary.

He transitioned from champion steeplechase rider — of his innumerable concussions, he said, “I would ride on a Saturday and wake up in a hospital Sunday” — to leading ‘chase trainer to, eventually, a trainer over the flat.

In that latter incarnation, he won nearly 600 races, with purse earnings of more than $20 million.  Of his wins, eight came in Grade 1 company — evenly split, he hastens to remind you, between dirt and turf.

He achieved perhaps his greatest fame when he conditioned Da Hoss to a win in the 1996 Breeders’ Cup Mile, a feat which the horse reprised in 1998 — off just a single prep race, an allowance contest at Colonial Downs.

Seven years later, Dickinson registered a similar accomplishment, when his trainee A Huevo, a West Virginia-bred son of Cool Joe, scored an upset in the Grade 1 Frank J. De Francis Memorial Dash at Laurel Park.  A Huevo was making his third start off a nearly four-year layoff in the De Francis.

A year after that, Tapit, another of his trainees, rallied to take the Grade 1 Wood Memorial and stamp himself a top Kentucky Derby contender.  The Derby dreams didn’t pan out — Tapit finished ninth — and by 2007, Dickinson had decided to leave the training game to focus, with his wife Joan Wakefield, on developing and marketing the artificial racing surface Tapeta.  Now in its 10th — and, Dickinson says, best — iteration, Tapeta is in use at such tracks as Woodbine in Canada and Wolverhampton, in his native England.

So there was success aplenty, but that wasn’t enough for Dickinson, who exudes a kind of restless energy as he leads visitors around the farm, his long stride leaving most in the dust.  He thinks now will be different.

“I trained before and I didn’t think I did well enough,” he says.  “I want to prove to myself that I’m a better trainer than I was.”

The gleaming signs of this commitment are everywhere: the fancy new trailer which literally still has a new car (rather than an old horse) smell, the big hole in the floor of the performance center which will house a hyperbaric chamber, the salt room (in which oxygen enriched with crushed pharmaceutical grade salt circulates), the extra-large walking machine, the cold water spa.

Outside are a warmup track, a main track, a half-dozen turf courses — which include one lane designed to be usable during basically drought conditions and another (“Noah’s ark,” they call it) usable during rainy times — portable round pens, and dozens of acres for turning horses out.

And that’s to say nothing of the filtered well water or special herb remedy — “fermented three months,” Dickinson says — that the horses receive.

That’s the key to the whole endeavor.  Dickinson has a brand name and a spectacular facility to back it up.  But sending horses to him won’t be cheap — his day rate will approximate those of top New York trainers, he says — and that means that wins, and plenty of them, will need to follow.  His name and farm alone won’t be enough to keep the stalls full.

Dickinson says there’s no magic bullet but that what he’s learned during the last eight years of study and research and travel should stand him in good stead.  He won more than 23 percent of his races in his first stint training horses, which seems a good place to start, and he believes that the improvements he’s made at Tapeta give him a key advantage, though he repeatedly describes this or that feature as “no big deal.”

“I just hope it’s going to be an aggregate of marginal gains,” he says.  “I’ve got 26 levers I’ve got to pull that the guys at the racetrack don’t.”

Dickinson seems excited about the journey on which he’s embarking, but at the same time, he’s like a host in the moments before the party starts, wondering if anyone will show up.

“A few people have said they would send me horses, but until the horse van shows up, you never know,” he says wryly.  “I have no idea what to expect.”

Neither, of course, does anyone else, but if past is prologue, it ought to be interesting finding out.