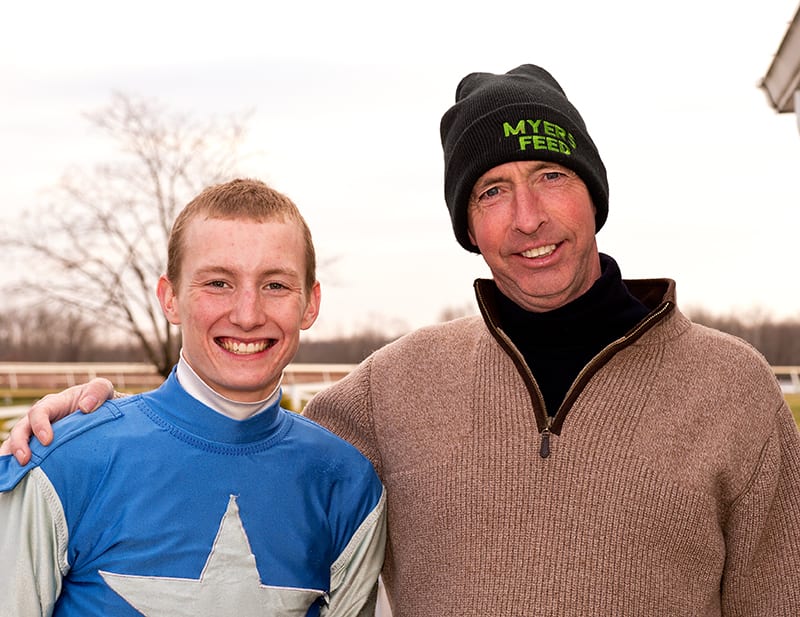 Trevor McCarthy and Kieron Magee wrapped up titles for the calendar year in the jockey and trainer divisions respectively at the major Maryland tracks after today’s final card of the season at Laurel Park.

McCarthy finished the year with 167 victories at Laurel and Pimlico Race Course, 41 ahead of Victor Carrasco. The 20-year-old captured the riding titles at all three meets during the year (Laurel winter, Pimlico spring and Laurel fall). He finished with 52 multiple-win afternoons in Maryland this year.

“It was my goal to win all three meets and it was huge accomplishment but it took a lot of hard work,” said McCarthy, who was also the state’s leading rider as an apprentice in 2013. “I got to ride a lot of good horses this year. I would like to thank all the trainers, owners, grooms, exercise riders, hot walkers and my agent, Scott Silver, for all their efforts.”

McCarthy, who ended the year ranked seventh in North America in wins (263) and 20th in earnings ($8.1 million), broke his right wrist in a spill December 20.

“I will be out six to eight weeks,” added McCarthy. “Right now I don’t need surgery but I do have to go for another appointment. Hopefully it will continue to heal the way the doctors want it to.”

“I was getting nervous because Claudio was coming but we hung on. I am very happy,” said Magee, who set career-highs in wins (84) and earnings ($1.4 million). “Winning at Pimlico was a thrill. That is home for me and to be able to win a meet at such a historical place is something I will never forget.”

Gonzalez sat atop the Laurel fall standings with 31 victories.

Magee and McCarthy will be honored by the Maryland Jockey Club in January.