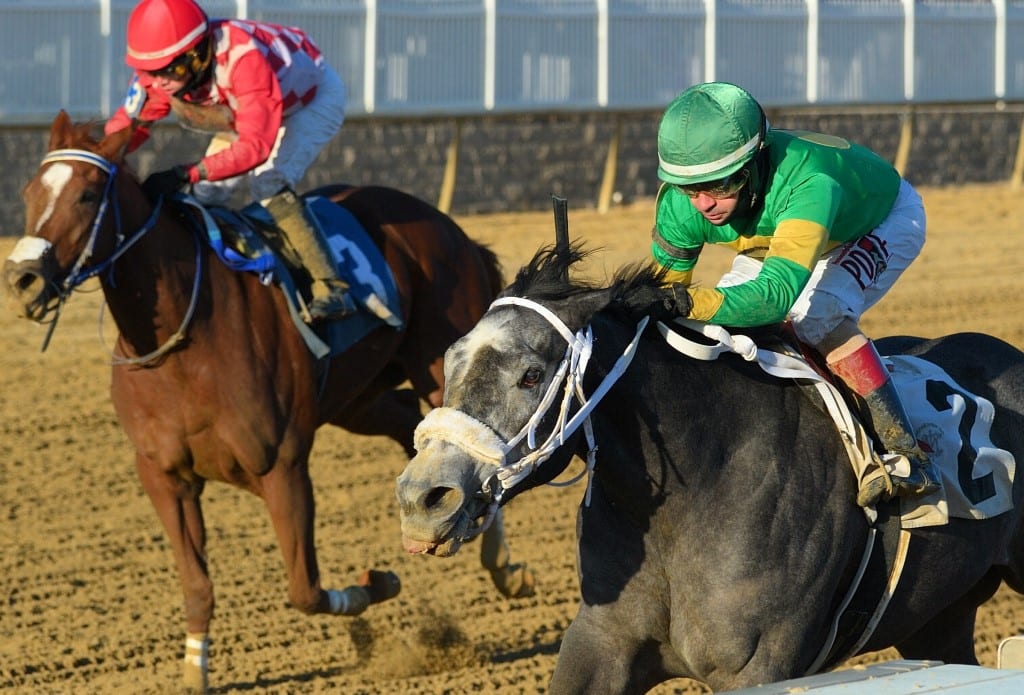 Cofactor has won three straight races. Newstome has won two straight and three of four. And despite arriving at Laurel Park Saturday with pretty different resumes, they both left with juvenile stakes wins to add to their resumes.

toneway Farm’s homebred Cofactor extended her win streak to three races in her stakes debut, powering between horses down the stretch and drawing away by 1 ¾ lengths in Saturday’s $100,000 Warrior’s Reward Smart Halo.

The 23rd running of the Smart Halo for 2-year-old fillies shared top billing with the eighth renewal of the $100,000 James F. Lewis III for 2-year-olds, both at six furlongs, on the Military Family Appreciation Day program.

Top choice at 6-5 in a field of eight, Cofactor ($4.40) and jockey Joe Bravo were stuck behind horses midway on the far turn but found room once straightened for home to put away her rivals. The winning time was 1:12.24 over a fast main track.

“I was worried that she was boxed in there,” winning trainer Kelly Breen said. “She was in tight and when she got clear I was just hoping that she had that kick, and she did.”

A winner of nearly 5,400 races who two weeks ago scored his first career Breeders’ Cup victory aboard Blue Prize in the Distaff (G1), Bravo positioned Cofactor in fifth along the inside from Post 2 as Letsstaypositive was in front through fractions of 22.20 and 46.52 seconds.

Bravo went to the whip twice on the turn to keep Cofactor in touch with the top flight but still had four horses in front of him approaching the top of the stretch, when they began to spread out allowing plenty of space for Cofactor to take charge.

“Best thing to do in horse racing is don’t think,” Bravo said. “She’s a really talented filly and she broke really fast. I think if I kept after her she could have kept up there close but she’s such a smart girl. She’s had [time] off, she let those horses go a fast, honest pace and turning for home those horses split and she was ready to roll.”

Cofactor had been on or near the lead in each of her first two starts, both at Monmouth Park, the latter a neck maiden special weight victory Sept. 14. She came back in an optional claimer Oct. 16 at Keeneland, where she got caught behind horses before getting up to win by a head.

“That race was kind of a shock. We didn’t really expect to sit off the pace but they went really fast,” Bravo said. “It gives you such an advantage to have a horse that sits off the pace and can watch horses in front, and she kicks in when you ask her.”

Lucky Trinity, a waiver maiden claiming winner at Laurel in her only previous start, drifted wide through the stretch and finished second, 1 ¼ lengths ahead of Still Alive. Letsstaypositive, Cruise and Danze, Always Something, Ilchester Cheetah and Summer Fortune completed the order of finish.

Though Cofactor had been training as part of Breen’s small string at Laurel, the trainer said the daughter of The Factor was expected to head north before likely returning to Maryland for the $100,000 Gin Talking Stakes going seven furlongs Dec. 28.

“She’ll probably go back to our barn in New York for the next month and then there’s [the] seven-furlong race here,” Breen said. “Originally we were planning on taking her to Florida, but we like the money here at Laurel.”

Two races prior, Marie Trombetta’s Newstome slipped through an opening along the rail in deep stretch to pass pacesetter Reform School and hold off a late rush from Informative on the outside for a popular nose triumph in Saturday’s $100,000 James F. Lewis III at Laurel Park.

The eighth running of the Lewis for 2-year-olds shared top billing with the 23rd renewal of the $100,000 Warrior’s Reward Smart Halo for 2-year-old fillies on the Military Family Appreciation Day program.

Ridden by Trevor McCarthy for trainer Mike Trombetta, Newstome ($5.60) ran six furlongs in 1:10.65 over a fast main track as the 9-5 favorite to earn his second stakes win in four career starts and first on the dirt. He captured the Mark McDermott Stakes over Presque Isle Downs’ synthetic surface in his prior start Oct. 16.

“It’s a cool feeling,” Mike Trombetta said. “I’ve been terribly unfair to him. He’s run on a different surface every time he’s run. He’s four starts into his career and he hasn’t run on the same surface two times in a row.”

Under McCarthy for the first time, Newstome settled in fourth as 30-1 long shot Reform School, shipping in from Charles Town, was quickest from the gate and went the opening quarter-mile in 22.87 seconds and a half in 46.40. McCarthy stayed patient awaiting room as Reform School turned for home and opened up, but Newstome continued to grind along the rail and got up in the final strides.

“He broke really well for me today and the speed horse who I thought would go to the lead went to the lead and we were able to save all the ground and get a nice covered-up trip,” McCarthy said. “Turning for home I was little worried that [Reform School] got away from me but he was very game. Every time I asked him for more, he just kept giving.”

Informative swung three wide to edge Reform School by a half-length for second. Sir Back in Black was third, followed by stakes winner Raging Whiskey and Bernie’s On Fire. Tuggle, the 3-1 program favorite, and Ain’t Wasting Time were scratched.

Newstome is a Pennsylvania-bred son of Goldencents out of the Unbridled’s Song mare Newstouse who the Trombetta’s purchased for $30,000 out of Fasig-Tipton’s Midlantic 2-year-olds in training sale in May. He debuted with a maiden special weight win over the Parx dirt Aug. 3, then was seventh behind subsequent Futurity (G3) and Breeders’ Cup Juvenile Turf Sprint (G1) winner Four Wheel Drive in the Rosie’s Stakes on the grass at Colonial Downs.

“We picked him out at the 2-year-old sale at Timonium, and he’s been a tremendous amount of fun,” Mike Trombetta said. “He was just put together well. He’s not a real big horse but he’s an athletic type. He had a good breeze for the sale and, quite frankly, he was priced right.”