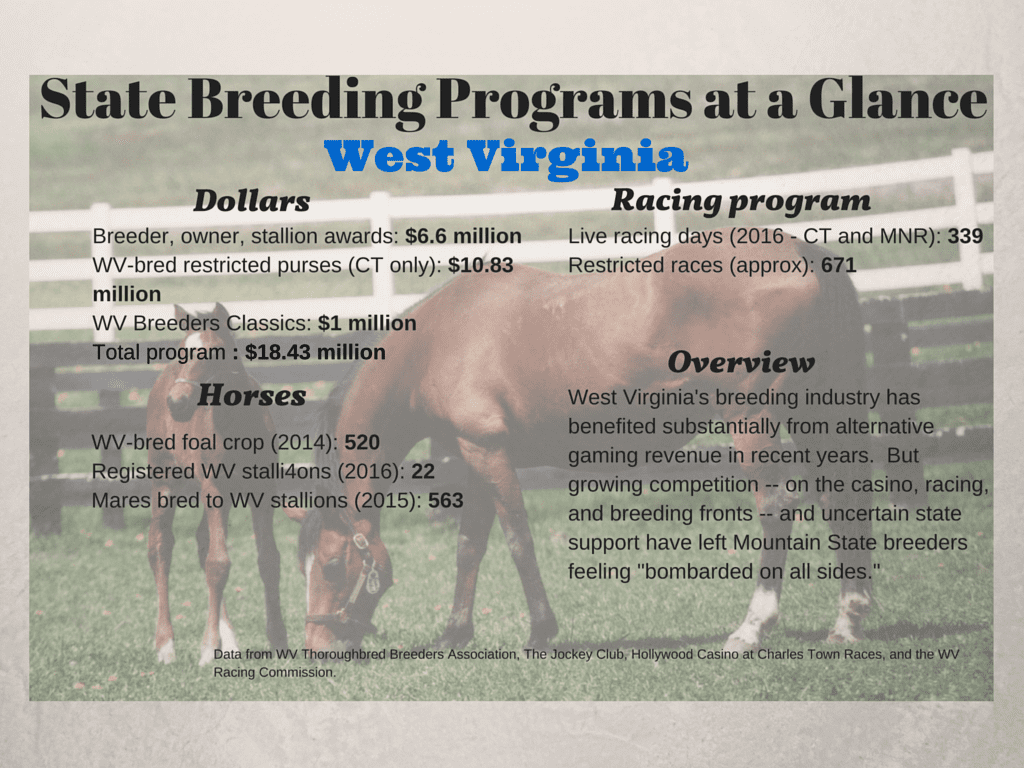 With breeding season upon us, The Racing Biz continues a state-by-state review of the incentive programs and status of the industry in each mid-Atlantic jurisdiction.  Up today, West Virginia.

But as with neighboring Pennsylvania, frequent meddling by the state legislature into the industry’s revenue stream from expanded gaming (video lottery terminals), as well as a shrinking number of racing dates, have caused many breeders and prospective breeders to have second thoughts about dropping their foals there.

In 2010, there were 722 mares bred to West Virginia stallions, a number that dipped to 563 in 2015. The annual registered West Virginia foal crop, however, has also fallen, though more moderately, with 532 foals dropped in 2010 and 520 in 2014, according to the Jockey Club. And in 2016, 22 stallions will stand in West Virginia, down from 29 in 2015, the West Virginia Thoroughbred Breeders Association reports..

Gaming competition from neighboring states coupled with legislative action that has shifted VLT purse revenue to other West Virginia state programs has impacted the purse accounts at both Charles Town and Mountaineer. To help maintain a competitive purse structure of about $130,000 per day, Charles Town and the local Horsemen’s Benevolent and Protective Association agreed to race 179 programs in 2016, down from 193 in 2015 and 41 less than the minimum that must be applied for by statute.

To make matters even more distressing for West Virginia breeders, increased competition from the newly expanding gaming operations of Ohio and Maryland has impacted the West Virginia Thoroughbred Development Fund.

Dr. Doug Allara, president of the West Virginia Thoroughbred Breeders Association, said legislation authorizing advance deposit wagering is on a wish list for the group, as well as instant racing, both of which would add more money to the industry’s coffers, especially in light of the gambling expansion in Ohio and Maryland.

“Maryland casinos are the prime competition for Charles Town, while Ohio casinos impact Mountaineer,” said Allara. “The state of West Virginia is being bombarded on all sides. People are cautious about breeding because they are uncertain about the funding for our program going forward.”

The revenue that supports the purse accounts and breeders fund is the result of the Racetrack Video Lottery Act (RVLA), which authorized racetracks to operate slot machines under the auspices of the West Virginia Lottery and was passed in 1994. Counties in which racetracks are located were given the option of permitting VLTs to be installed at their racetracks, and voters in Hancock County (Mountaineer Park) approved the machines and began operating them in fiscal year 1995. Voters in Jefferson County, where Charles Town Races is located, approved VLTs in 1996, and they went into operation in September of 1997.

Two recent studies have shown that the racing and breeding industries in West Virginia are important economic sectors in the state.

The first, entitled “The Economic Impact of the Thoroughbred and Greyhound Racing Industries on West Virginia’s Economy 2012,” released in 2014, reveals that both industries account for at least $321 million per year in total business volume in West Virginia.

The study was made by the West Virginia University College of Business and Economics on behalf of both groups. The study found that the racing and breeding generate about $4.6 million in tax revenue for the state government.

The study also shows that, accounting for inflation, total pari-mutuel handle in the state dropped about 33 percent from 2004 to 2012, while purses earned from handle dropped 45 percent during the same period.

Similarly, the study also shows that purse and breed development revenue derived from VLTs is down almost 30 percent since 2005 — all in all painting a troubling picture of an industry in need of fresh ideas.

In 2015, the attempt to provide those ideas, the West Virginia Racing Industry Report, “Reflect, Reimagine, Restore,” a collaborative effort of more than 20 industry representatives, was released.

This year, 16 stakes for West Virginia-breds will be run at Charles Town, with total purses of $800,000.  Beyond stakes, the track also, Allara said, offers three state-bred races per day in its condition book, and in a recent weekend of racing, seven state-bred races actually were carded over a three-day period.  Charles Town offered 511 state-bred races in 2015, according to Vice President of Racing Operations Erich Zimny, with total purses of $10.8 million; that amount comes from the purse account, Allara said.

The West Virginia Breeders Classics series of races, held annually at Charles Town, was worth $1.08 million in 2015.

Mountaineer Park has yet to release its 2016 restricted stakes schedule. On average, Allara said, there are three restricted races written per day in the Charles Town condition book, and one at Mountaineer.