For Heros Reward, the end is a kind of homecoming

Trainer Dale Capuano had one last thought: try him on the grass.

Haynes replied, “We got to do something, because we’re one race away from giving him away.” 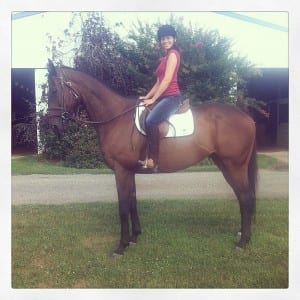 Heros Reward earlier this week, here with Nicole Ausherman aboard. Photo by the Foxie G Foundation.

The bettors didn’t think much of the idea; they sent Haynes’s horse off at 61-1.

But Heros Reward ran second that day, won his next out in allowance company, and never again ran on conventional dirt.  He went on to win 16 of 58 starts and more than $1.3 million.  He raced against some of the best turf sprinters of his generation and gave as good as he got; he won seven stakes, three graded, and ran a credible fifth in the Breeders’ Cup Turf Sprint.

The news this week that Haynes and Slysz had decided to retire Heros Reward came just a week after the death of one-time Grade One winner Monzante had created a firestorm in racing by demonstrating what can happen to an old warhorse when things go wrong.  The story of Heros Reward demonstrates the reverse: connections making sure that their onetime star reaches the end of his career on his terms and finds a soft landing when he gets there.

“He goes above and beyond,” Laurie Calhoun says of Bob Haynes’s care for his horses.  “That’s his philosophy.”  Haynes has committed to paying for the horse’s board for the rest of his life, and since Hero is a sound and healthy 11 year-old, that could be quite a while.

Calhoun and her sister Nicole Ausherman co-founded the Foxie G Foundation, which provides for the rescue, rehabilitation, and rehoming of Thoroughbreds.  The Foundation is located at Summer Winds Farm, owned by Calhoun and her husband Jerry.  It is at Summer Wind that Heros Reward spent winters during his racing career, and it is there he will while away his days, doing a little light work and “being spoiled,” Calhoun said.

That light work will include at least a bit of ambassadorship for the Foundation; Hero is slated to be featured in a short demo of flat work at The Foxie G Foundation’s Open House on September 8th.

“The main thing that having Heros Reward here does is that it shows people outside of racing that people in racing do care about their horses, and will step up for their horses,” Calhoun says.

Haynes, formerly a jockey’s agent, doesn’t see providing for Hero as anything “above and beyond,” however.  In fact, he says, what he’s doing is nothing more elaborate than what he should do.  “It’s about your moral and financial responsibility to take care of this animal when his career is over,” he said.

Certainly, the now 11 year-old gelded son of Partner’s Hero out of the winning Caveat mare Lifes Passage did his part.

Once switched over to grass, the horse ripped off a four-race winning streak in early 2007, culminating in a win in the Baltimore City Turf Sprint (now the Jim McKay Turf Sprint) on the Preakness undercard.  Later that year, he won the G2 Nearctic at Woodbine, upsetting the very fast Smart Enough in a race that Haynes calls one of Hero’s most memorable.

“I was absolutely amazed,” Haynes said of the win.  “Dale [Capuano] had him as ready as you can have a racehorse.”  Heros Reward broke sharply, took the lead at the head of the lane, and held off his rivals for the biggest win of his career.  “My phone was just buzzing after that race,” Haynes recalls.  “It must have been 30, 40, 50 calls.”

For all that, it might be a defeat which is even more memorable.  In the 2008 Breeders’ Cup, Heros Reward ran fifth, beaten just over two lengths for the money.  Haynes recounts the obstacles the horse faced — a bad post position, a less than ideal trip, unfamiliar surroundings — and then says, earnestly, “I have never been so proud, as an owner, in my life.”

Heros Reward won his final start of 2012, in starter allowance company, and this year ran fourth in the Mister Diz Stakes for Maryland-breds and then fourth again in another starter allowance.  It was time.  “We gave him two shots this year,” Haynes explains, “and he ran respectful.  I didn’t want to demean him by dropping him.”

In Heros Reward’s final victory, last November, track announcer Dave Rodman credited the horse’s triumph, simply, to his possessing “too much class” for his rivals. 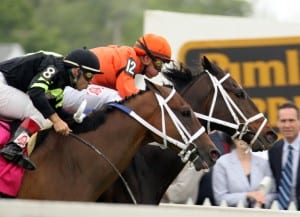 Laurie Calhoun wouldn’t dispute that.  “Hero’s given [Haynes] so much — not just financially but also emotionally,” she says.

Haynes would agree, too, but only to a point.  He remembers every detail, large and small, of his years owning Heros Reward.

But what we owe to our horses, he suggests, we owe to all of them and not just the stars.  “These animals have a heartbeat,” he emphasizes.  “The horse comes first.”