Nick’s Picks and Notes for June 22

With more pace in this year’s Colonial Turf Cup, Air Support may get the help he lacked in last year’s running when Turbo Compressor wired the field, largely uncontested.  Kentucky Derby winning trainer Shug McGaughey likes how the 2011 Virginia Derby winner is coming into the race. 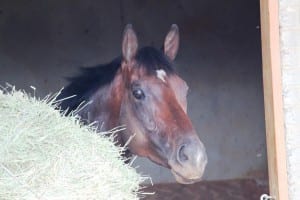 Nick’s Pick to get the money: Atigun. Photo by Nick Hahn.

“He ran a really good race at Keeneland and the race at Churchill was sort of ‘iffy’ but then he came back and trained very well,” said trainer Shug McGaughey.  “He’s going to appreciate the stretch out.”

Last year’s winner Silver Max hadn’t won since last year’s Virginia Derby until he captured the Opening Verse at Churchill Downs last month that was pulled off the turf.  With the 8+ length win in the sloppy going, trainer Dale Romans is going to attempt the dirt for the frontrunning talent.

The pace in Paddy O’Prado’s two Colonial wins was set by Two Notch Road back in 2010.  After more than a 2 & 1/2 year absence from the track, Two Notch Road is in the midst of a comeback.  The turf transition for Atigun appears to be working well with two solid efforts at Churchill Downs.