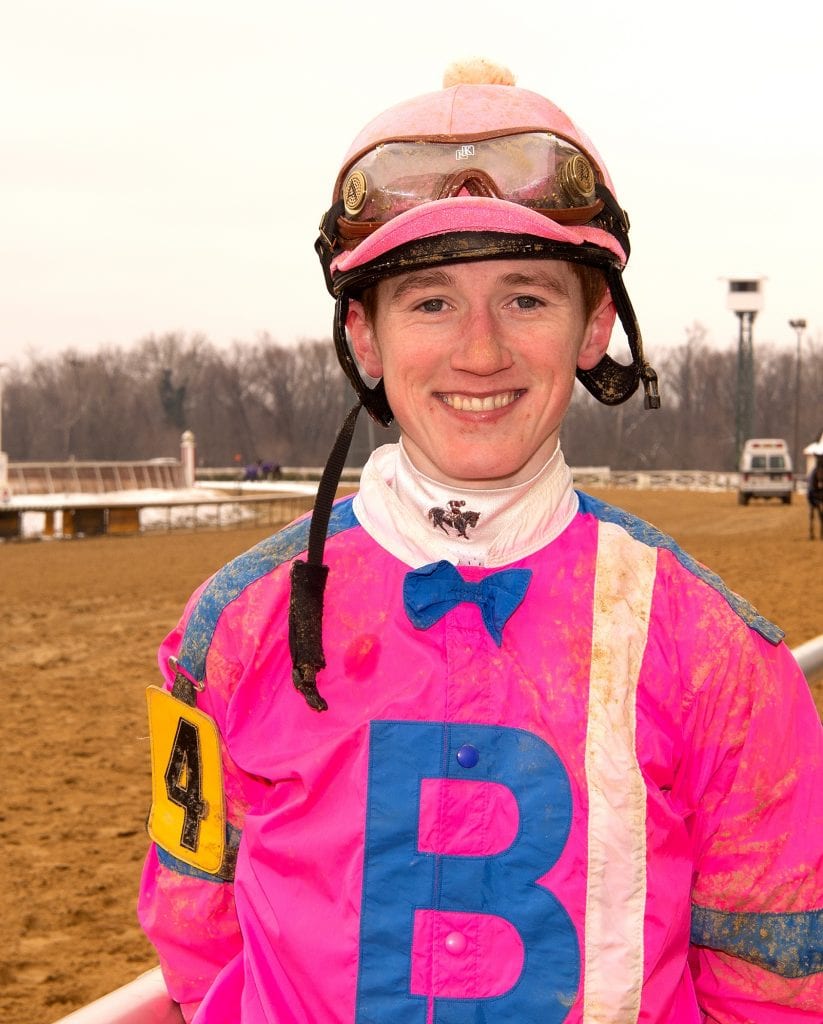 Bobby G was the 13th mount for Egan, who works for Corrales in the morning and made his U.S. debut aboard multiple graded-stakes winning millionaire Something Awesome in the General George (G3) Feb. 16, as a late substitute for Hall of Famer Edgar Prado.

The Irish-born Egan, 19, also spent the winter of 2016 working for Corrales at Laurel before returning to England to launch his riding career.

“I’ve been here about three weeks now. I want to thank Jose Corrales, who’s taught me a lot,” Egan said. “Before I even rode in England, he taught me a lot about riding and he’s been a big influence in my career. To ride my first winner in America for him is pretty special.”

Egan gave Bobby G a patient ride from Post 4, saving ground behind the leaders and sending the 5-year-old gelding through an opening on the inside once straightened for home before powering through the stretch as the 3-1 third choice in a field of seven.

Egan’s roots in racing run deep. His maternal grandfather is the late revered jockey and trainer Dessie Hughes, and his mother, Sandra Hughes, is a former trainer whose brother, Richard, was a champion jockey in England. Egan’s father, John, is a friend of Corrales who was Ireland’s champion apprentice of 1986 and a Group 1-winning rider still competing in England at age 51.

At age 16, David Egan attended the British Racing School in Newmarket before going to work for trainer Roger Varrian. He won 61 races during his championship season of 2017 and had 72 wins last year, riding his first race as a journeyman July 31, 2018.

“My main year as an apprentice I was the champion and then I improved on that the following season and had a couple of stakes winners,” Egan said. “My career is on the up, hopefully. I’m just trying to see how I can do in America.”

Egan is named in two of nine races Saturday at Laurel and three of eight races on Sunday’s program. Post time both days is 12:30 p.m.

“The plan is to keep riding winners and keep improving, and hopefully do well,” Egan said.

Hoffa’s Union struck on February 28 at Laurel Park. And he left a lasting impression.

The three-year-old Union Rags gelding, making his career debut, sped to the front under jockey Jorge Ruiz, fended off a bit of a challenge in the opening half-mile, and then simply ran away and hid from his five wildly overmatched rivals. Hoffa’s Union won by 15 1/2 lengths in a sharp time of 1:43.61 for about a mile and a sixteenth; that time was slightly faster than the 1:44.01 posted by older, three-other-than allowance horses one race prior.

Hoffa’s Union, out of the stakes-placed Malibu Moon mare Malibu Red, is trained at Laurel by Gary Capuano. Capuano purchased him, as agent, for just $11,000 out of the Fasig-Tipton Midlantic May two-year-olds in training sale, and he is owned by Non Stop Stable, Rose Petal Stable LLC, and Foard Wilgis. Hoffa’s Union was bred in Kentucky by Frederick Allor.