Our In Focus Guide offers the most in-depth analysis and commentary on all six stakes on Saturday’s G2 Barbara Fritchie Stakes day card at Laurel Park.

#2 – Bodhisattva (10-1): Deep Closer hasn’t visited the Winners’ Circle since winning this event last year when 22-1; needs a quick early pace but won’t get it due to the cast of characters entered; he appears to run in cycles where after earning a near career high speed figure, he then regresses which points to this race as the one he’ll take a step backwards

#5 – Monongahela (10-1): At age 4 is the youngest in this field and comes off a fourth-place finish in his first stakes start, the $100k Native Dancer here last month, finishing behind Afleet Willy and Bodhisattva, which broke a string of nine consecutive starts finishing in the Exacta; don’t think stretching out the extra  sixteenth will help along with his off the pace running style here where it’s doubtful the early fractions will be quick enough to have the pace-setters come back to him; BTW the Monongehla (“falling banks”) is one of the Three Rivers that form the Ohio River at Pittsburgh


#2 – Dynamic Asset (15-1): This Astrology colt was a $6,500 Kee weanling purchase and has earned over $42k in just two starts; goes for the natural Hat Trick while coming off a 5-month layoff; just 3 published works since last start which the first of them was 3 weeks ago; might be playing catch-up in being ready for a top effort…   #4 – Oldfashioned Club (10-1): Entered on Friday’s card in an OC$50kN1x so if he goes here the connections must not be afraid of anyone and/or feel strongly that his fifth-place effort against the top 3 who are in here was filled with excuses as he stumbled at the start and was behind horse at 5/16th…   #6 – Old Time Revival (12-1): Got caught up in a speed duel with Wentz in latest was unable to go on as “Cowboy” Hamilton saved him for another day; bullet work since proves he’s quick for 4 furlongs but needs stamina to go twice as far here 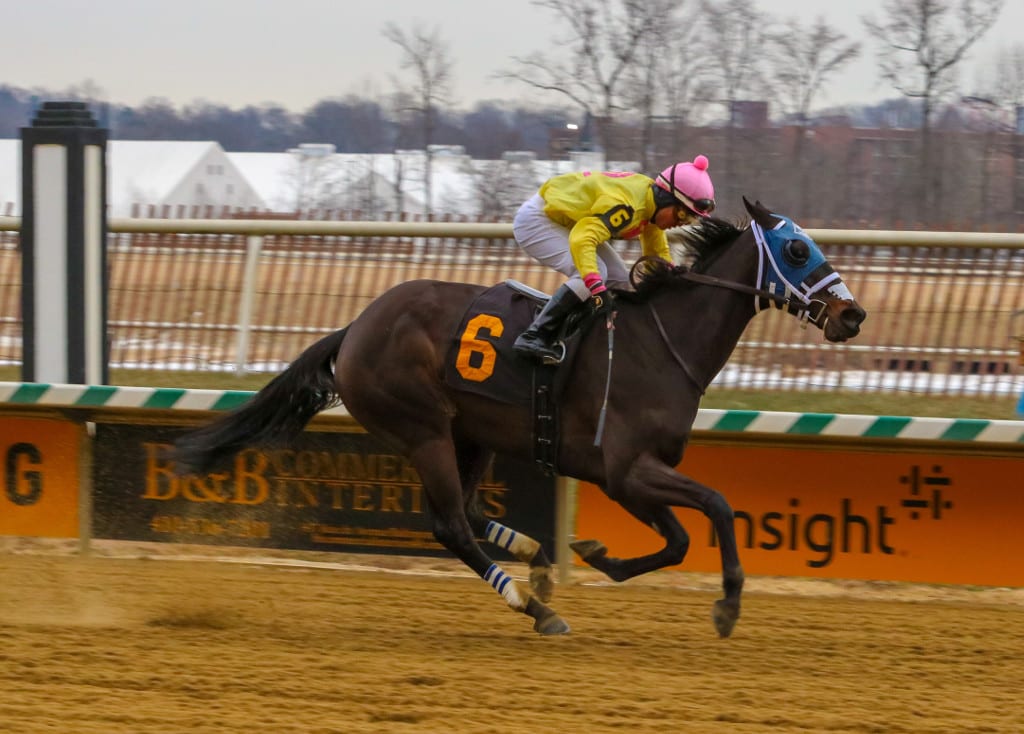 
#2 — Just Got Out (6-1): Veteran finally won first allowance two back, then held on to win the Ladies after having it her own way up front — but seems unlikely she’ll control the pace so easily here… #3 Frisky Whiskey (30-1): Would be a major surprise in this spot off a third-place finish in a Parx starter allowance… #5 Sky Flower (8-1): Has been second or third in two recent local stakes but will need to find a way to better three rivals here who have finished ahead of her. Good news: never worse that third at the trip… #8 Not Taken (15-1): Feels a bit more like preparation for turf season than a spot where this grassy mare will win. She was second last out, in November, in a turf stake at AQU… #9 Felini (5-1): Has lost four straight at the second allowance level after winning first allowance by 18 (!) lengths at PRX. Figures a forward factor early here but will need a big one to win… #10 Miss Inclusive (15-1): Outer post won’t help, and this Servis trainee has done a bit better at slightly shorter distances. Credible effort in last when rallying, but look for jockey Vargas, Jr. to try to put this one in the mix early today. 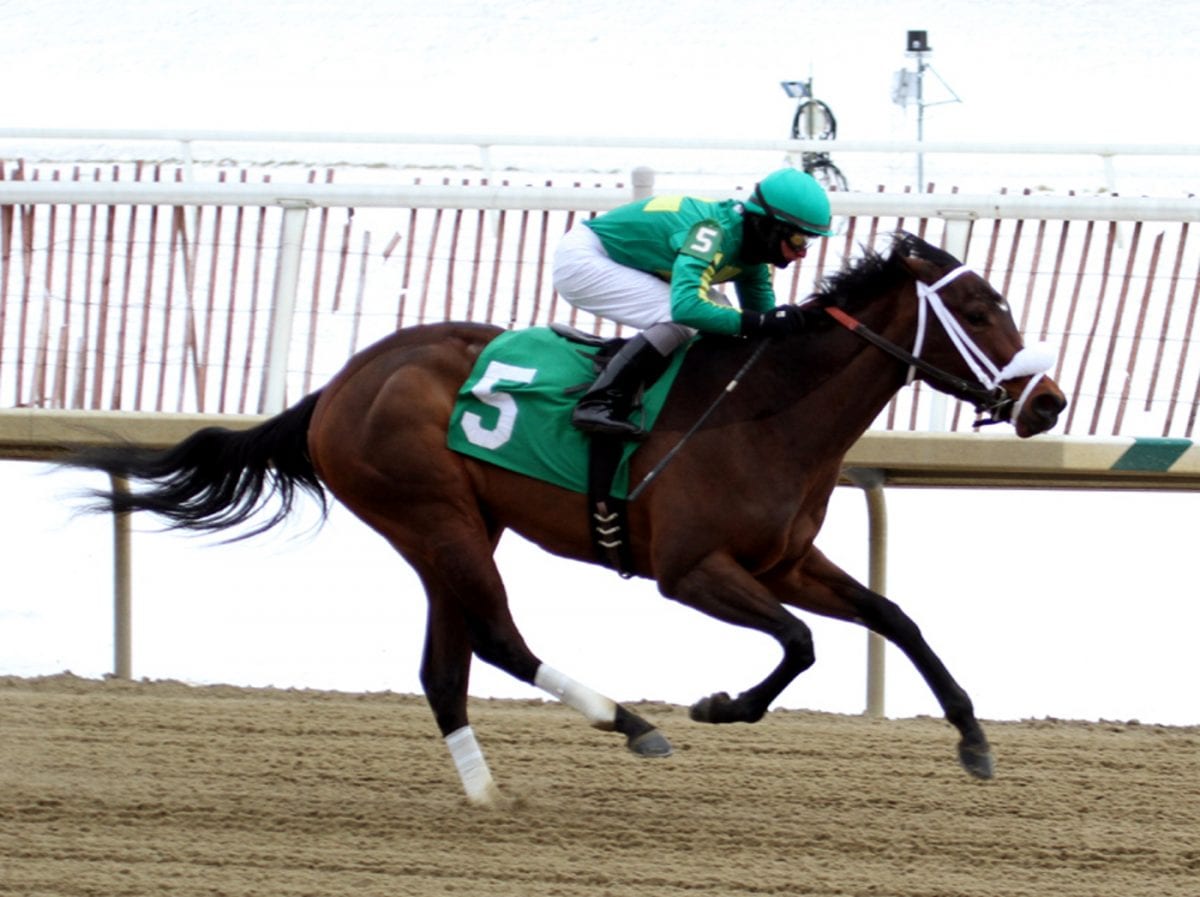 
#5 – Shemakesmehappy (12-1): Prx-based daughter of Majestic Warrior was an easy winner in in latest (Alw30000s) on her home dirt oval when equipped with blinkers first-time; question competition as two back when fourth, the winner and runner-up came back in same $25k race at Lrl and ran last and next to last…
#6 – Aggregator (8-1): Ridden hard in stakes debut just 3 weeks ago but chased rivals in vain; faces a few of those foes again in here; speed figures come up short though they have been climbing; if she continues the “win one, lose one” pattern she’ll win this one…
#7 – Last True Love (3-1): Ran huge in second stakes try when a 10-1 bridesmaid in Marshua Stakes on Jan. 27 over the Lrl dirt going 6 furlongs; the more promising of the two F. Stites uncoupled runners per Morning Line but will get early pressure while having to carry speed an extra furlong


#1 – Cowboy Mz (12-1): Speedy sprinter came back from 3-month vacation in fine fashion,  winning twice in as many starts by a combined 11+ lengths, earning 103 and 96 BRIS#s; still a tough spot for (graded) stakes debut and stretching out to 7f… #2 – Awesome Banner (7-2): Five-year-old finally flashed speed and winning form in first start of 2018 with a victory in the $100k Fire Plug, reminiscent of the way his career began three years ago winning two graded stakes; question is can he build on that win or bounce… #3 – Sonny Inspired (30-1): 7-year-old has eight career wins but none in a graded stakes; earned SHOW purse in this event in 2016 but that followed a victory; hasn’t hit the board in last six starts… #5 – Ballivor (30-1): Makes huge jump into graded stakes after two carbon copy wins at this distance v. restricted and open AlwN1x; needs to improve even further just to sniff a minor share… #6 – Something Awesome (6-1): House Horse switched North America home offices from WO to Lrl 4-months ago and loves the new digs (3:2-0-1) with first stakes ITM finish (SHOW) in latest behind the top two picks… #8 – Grasshoppin (15-1): PA-bred will be saddled by Lrl leading trainer C. Gonzalez; was 8th in this event last year when sent off 51-1; expecting same


#1– Miss Divine Grey (9-2): A $16k Claimer less than a year ago, trainer D. Gargan has made her a stakes winner, earning triple-digit BRIS#s in latest two efforts but rail assignment will force jocks hand early… #2 – Boule (12-1): No worse than second in five career main track starts loaded with next out winners; speed figures keep ascending for this W. Mott trainee; biggest test to date… #3 – Sky Flower (20-1): Runner-up behind Bishop’s Pond has held her own in minor stakes at long odds but will need a Herculean effort to be ITM in first graded stakes try and at this distance… #4 – Frisky Whiskey (30-1): Beaten favorite v. A10000s at Prx is hardly a positive prep for a run in a G2 event; not in a million years v. this assembled group…   #5 – Tazkeya (20-1): Needs to greatly improve off her recent efforts speed figure-wise; added distance will help… #7 – Moiety (15-1): Overcame a terrible start in minor stakes at Mvr in last outing which was 3-months ago; draw a line through G2 Chilukki going one mile and you have one capable of an upset…   #8 – Bishop’s Pond (10-1): 1 fo1 at Lrl as she went gate-to-wire in $100k Thirty Eight Go Go in most recent effort making it 2 for 2 on a fast track for this turf runner; will be first start going 7 furlongs