In Focus: Wagering Laurel Park “Class on the Grass” Stakes

Our In Focus Guide offers the most in-depth analysis and commentary on the big stakes on “Class on the Grass” stakes day at Laurel Park. All photos by The Racing Biz.

#2 – Jump Ship (30-1): Runner-up to prohibitive favorite in here, Rose Brier in a similar stakes last Fall but has not built on that success, failing to hit the board competing in AlwN1x company… #6 – Officer’s Oath (30-1): Exits a successful steeplechase campaign (3:2-0-1) which followed his fifth place effort in this event last year when 72-1; smart turf rider takes reins for the first time and could help his chances today… #7 – Galaxy Express (30-1): Still eligible for N2L races, will try to get his trainer her first win of ’17; usually does all of his running late on the lawn which could be a detrimental to his chances as the early pace will likely yield slow fractions 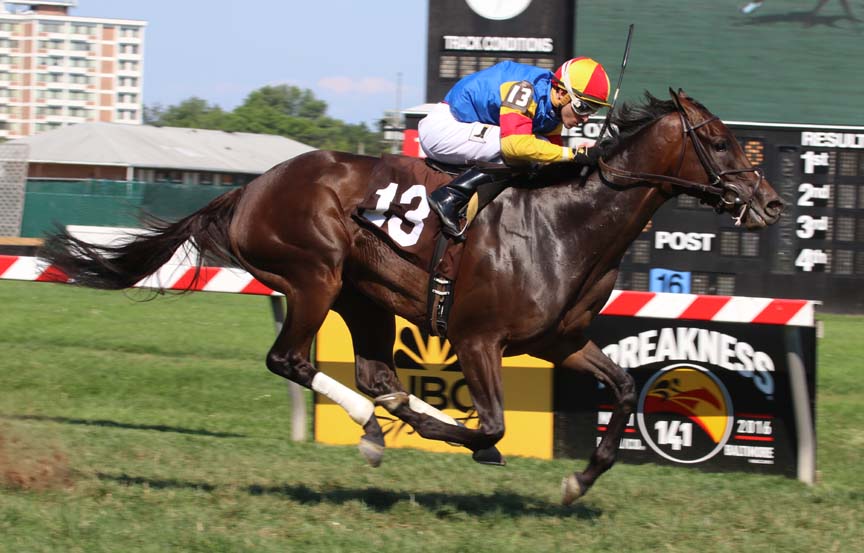 #2 – Sweet Sandy (15-1): Need to draw a line through last two outings as they were washed off the turf after being claimed for $20k; came on late to get fourth-place purse in this event last year when run at Pim 1 /16 miles… #3 – Complete St.(8-1): Has hit the board in half of her outings over the Lrl turf (8:1-2-1) as those two runner-up efforts came with today’s rider, Forest Boyce in the saddle; an unlucky fifth in ’16 Nellie Mae Cox has a big chance to makes amends … #4 – Grace Is Ready (15-1): In over her head when 57-1 in G3 Gallorette, Preakness Day and ran to those odds; only two victories came sprinting on tur, one via DQ; a minor share would be an accomplishment.… #7 – Street Miz (30-1): 0 for 9 on the grass and lone win against winners came in a $5kN2L on the dirt; on a positive note she earned career best turf speed figure in latest start… #9 – Andrasta (20-1): Got short end of two head-bobbing finishes in last two outings while speed earning career best figures in those two give a glimmer of hope she’s matured beyond the two drubbings received in similar stakes events last year

#2 – Le Weekend (15-1): Will be heard from in the early stages but speed figures from both turf starts don’t measure up rivals in here; might benefit from the additional furlong; will be interesting to see if this top local 3-year-old is up to the task facing much better… #4 – Rockin Jojo (20-1): Makes turf debut in twentieth career start and bloodlines don’t indicate she’ll embrace the opportunity, especially cutting back to a sprint as she wants more real estate; not worth the gamble despite winning two state-bred stakes at long odds…  #7 – Daylight Ahead (5-1): Speedster can hang with others on or near the lead early but lacks the stamina and class to stay on; would behoove jock K. Davis to stalk the pace as this filly did successfully going 6 furlongs on dirt… #8 – Lovable Lady (7-2): Won this event last year in turf debut (pictured above, photo by The Racing Biz) taking advantage of a quick early pace which may not happen today; third race after layoff angle and trainer M. Eppler has won with 32% of her runners in minor stakes races over the past year #9 – Thissongisaboutyou (30-1): Still eligible for N2L races but owner/breeder willing to take chances v. other MD bred/sired runners; switch hot rider V. Carrasco may yield dividends…  #10 – Holiday Blues (15-1): In tough as she has finished behind a trio in here but those were on dirt w/ one exception; should enjoy added distance based on late running style but needs to run a career best to beat this field… #11 – Look Who’s Talking (30-1): Lone turf win from 5 such starts came in career debut over this Lrl lawn and would have to greatly improve off recent turf efforts just to hit the board 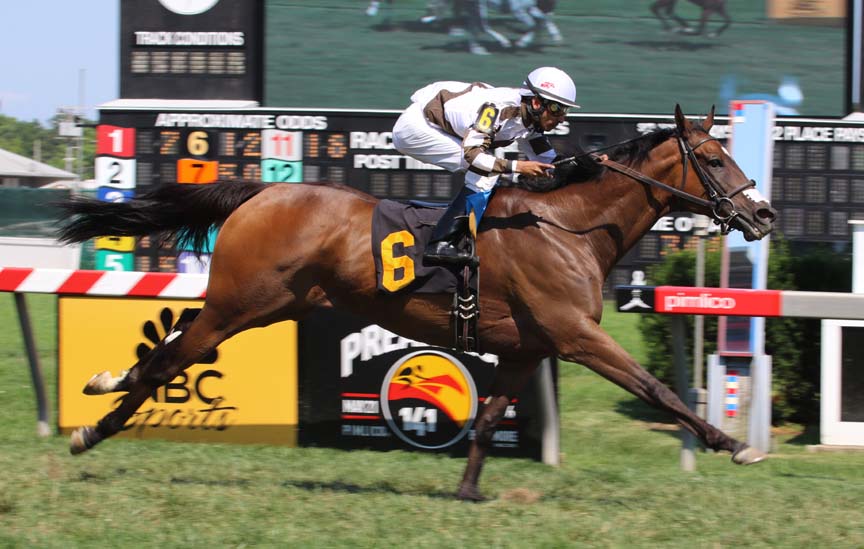 #2 – Rare Art (12-1): Prx shipper has been unlucky as 3 of last 4 attempts to run on turf were washed off; should be among a crowded early pace scenario after stumbling at start in first outing for trainer J. Guerrero (23% in ‘17)… #5 – Lime House Louie (20-1): 3-year-old ’17 debut was first v. elders and was not a factor; needs to find form when he won restricted stakes turf stakes last Sept. but must vastly improve speed rating as well… #6 – Tiz Our Time (15-1): Mare takes on the boys having never crossed the Finish Line first as lone win came via DQ has been no worse than third in past 8 starts which includes a SHOW placing in a similar F&M restricted stakes last Fall when 58-1… #8 – Fly E Dubai (30-1): Lone turf win came in career debut going one mile but appears this 3-year-olds future is sprinting; exit two synthetic surface sprints v. N2L 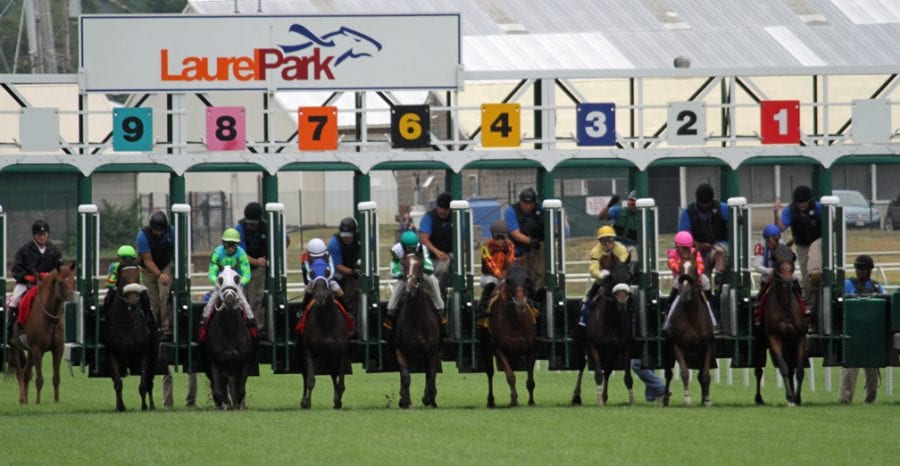 #1 Why Not Be Queen (15-1): Has lost five straight, most not close, at the second allowance level at KEE, FG, and CD, with declining speed figs. Ran a decent 4th in the ’15 Brookmeade around two turns, has done better work sprinting, but will need a big one here… #3 Awake the Day (8-1): Have to imagine trainer Bailes would have preferred to get a race or two in this More Than Ready mare before this event, but she didn’t post a work until three weeks ago. Was seventh, beaten less than four, in last fall’s Oakley against similar, but top three all return here. Turning tables figures to be a tough assignment, despite positive work tab… #4 Up Hill Battle (30-1): Aptly named filly is winless in four career tries on the lawn and has a career-best grass speed fig of 60, and neither of those figure to get it done here… #5 Perfect Trace (30-1): Another who figures to be up against it, this Pleasantly Perfect mare failed twice recently against $16,000 lifetime claimers, which means she’ll need a big step forward to have a say in here. Jockey Karamanos has been known to score at big prices on the lawn – but this big? #8 Kloonie (50-1): Wouldn’t be a Virginia-bred race without trainer Susan Cooney, but this sure is asking a lot of this sophomore Posse filly, who broke her maiden last out at Charles Town – on the dirt… with a Beyer speed fig of 34… whose siblings have never tried turf… whose dam never tried turf… #9 Sister Says (30-1): Nice effort last out to break her maiden in first turf try, closing from the clouds to win by a couple. That race produced two next-out winners, but this Keefe trainee hasn’t run since – more than two months ago… #10 Trish’s Wish (10-1): This Tim Shaw trainee has back class that fits here – she was second in the ’16 Oakley against similar, including Rapid Rhythm – but she’s working on a 10-race losing streak with declining speed figs. Backers might hang their hats on “third off a layoff” angle, but minor share is likely to be her high end… #11 Northern Eclipse (10-1): Lightly raced five-year-old has done her best work when closing into a pace, would need a career-best effort here… #12 Tiz Our Time (20-1): Tiz Wonderful filly was the show horse in last September’s Oakley, while still a maiden; it took her five more tries, a switch to dirt, and the DQ of rival Dirty Laundry for her to break her maiden, and follow-up, against allowance foes, was just so-so.

#1 English Minister (10-1): Winless 2016 campaign include three near-miss runner-up efforts, one against stakes foes in the nine-furlong Find; this’ll be the season debut for a hard-hitter who nevertheless rarely wins and hasn’t run this short since ’14… #2 Blu Moon Ace (20-1): Jamie Ness trainee has run decent races on the turf and was sixth in this event last year, finishing behind two that return. Threw in the towel last out on the dirt, against talented Seymourdini, whose two ’17 wins are by a combined 26 lengths. Shows a couple of sharp works in the interim, and an improved effort here isn’t out of the question… #3 Rockinn On Bye (6-1): Rock Hard Ten gelding figures to appreciate the class relief here on drop from graded company but finished eighth in this event a year ago and will need to pass several that bested him that day… #4 Eyeplayeveryday (12-1): His career-best efforts have come around two turns but does own an off-the-bench win sprinting on the dirt, form he’ll need to replicate here in his first since last September’s Laurel Turf Cup. Trainer Komlo is 2-for-11 in the last five years off long layoffs, though this guy has just three modest works to ready for this… #6 Sonny Inspired (8-1): Last couple aren’t great, but this guy has plenty of back class and ran fourth in the allowance in which Grandiflora was third, less than a length farther back with trip troubles. Ran second in this event in ’14 and third in ’15 – back when Ben’s Cat was, you know, Ben’s Cat… #8 Concordia’s Way (20-1): Best result for this Bailes trainee in four turf tries was a show effort, he’s lost three straight to first allowance foes, and it’s hard to see a much better outcome here… #11 Talk Show Man (8-1): Ham Smith trainee actually hasn’t run badly in two starts since a 17-month layoff, though well-beaten in both at odds of 96-1 and 70-1. He won’t be anything like that here, and full bro Just Jack won twice sprinting on the lawn — but it’s tough to know what to expect from a horse making his first sprint start in four years and 27 starts… #12 (ae) Spartianos (6-1): This speedster rates a legit shot if he draws in, and in a field full of routers and closers, might be all by his lonesome on the lead. One of his beaten rivals from two-back score beat allowance foes next out.