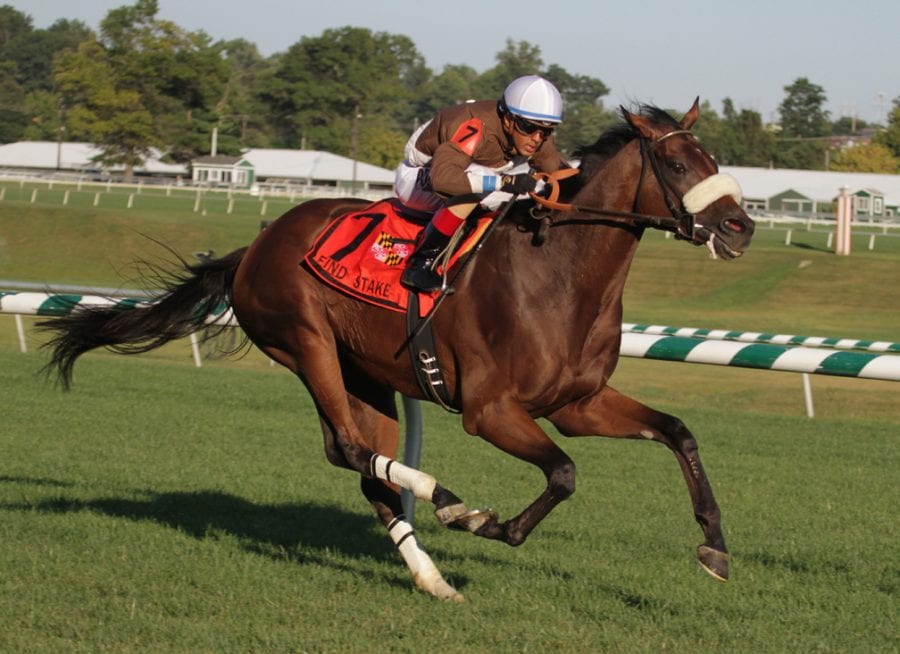 Colts Neck Stables’ homebred Force the Pass had a 3-year-old season to remember in 2015, winning four of eight starts including the Belmont Derby Invitational (G1) and never finishing worse than third while banking more than $1.1 million in purse earnings.

Things have not gone quite so well in 2016 for the chestnut son of champion sprinter Speightstown, who is still seeking his first victory as a 4-year-old. Trainer Alan Goldberg hopes it comes Saturday in the $200,000 Commonwealth Turf Cup (G2) at Laurel Park.

Force the Pass has run once previously at Laurel, finishing third by a length in last year’s Commonwealth Turf Cup. He has raced only four times this year with two seconds and a third, and was forced to scratch as one of the top choices in the May 21 Dixie (G2) at Pimlico with an illness.

“I think he’s doing really, really well; the best he’s done all year. I sent him down there Preakness Day and he got sick. He’s kind of been sick off and on all year but this race he’s going into very well, so we have no excuses,” the New Jersey-based Goldberg said. “He’s run well despite that, but not like we thought he would. We’ll see what happens on Saturday.”

Force the Pass has been beaten less than seven lengths in his four losses this year, coming up a half-length short in the April 2 Appleton (G3) at Gulfstream Park in his seasonal debut and again by a nose in the Forbidden Apple July 16 at Belmont Park. Most recently he was fifth by 3 ½ lengths in the Fourstardave (G1) at Saratoga, which was pushed back a week to Aug. 20 by inclement weather.

“We shipped him up the week before to run on a Saturday. It was a very, very hot day and then they canceled the races. We shipped him back home and then we shipped him back up, and it might have been a little too much for him. He was a little flat,” Goldberg said. “It’s nice timing from the last race. There was no rush to run him back. It’s worked out well; he’s had a couple good breezes and everything’s good, knock on wood.”

Jose Ortiz will ride Force the Pass from outside post 12 at 118 pounds.

Another multiple stakes-winning shipper comes in for the Turf Cup in Farhaan, who will be making his second start since being claimed for $40,000 by trainer Carlos Martin on behalf of owner Matt Schera. The 7-year-old son of 2006 Belmont Stakes (G1) winner Jazil debuted for his new connections running fourth by a length in the Bernard Baruch (G2) Sept. 5 at Saratoga.

Martin won a nine-way shake to get Farhaan, previously campaigned by Kiaran McLaughlin for Shadwell Stable. His last three races have come on turf, winning a pair of claiming events going 1 1/16 miles and one mile the day the he was claimed, Aug. 19, prior to the Baruch.

“We took a shot in the stake because he loves the Saratoga turf course and he actually ran a really good race. He was fourth beaten a length behind Ring Weekend in track record time, so we’re excited about him,” Martin said. “We think we made a hell of a claim. He’s a hell of a horse.”

Farhaan began his career running in Europe before coming to the U.S. in the summer of 2013. He was at his best at ages 4 and 5, winning four of nine starts including three stakes. Farhaan will break from the rail carrying jockey Feargal Lynch and 118 pounds.

“He’s just a beautiful, classy horse. He looks like a portrait and just does everything right. They did a great job keeping the horse sound and healthy for a long time,” Martin said. “Last time he got a little bit further behind than I would have liked to see. I think the mile should be perfect for him. As long as there’s a little bit of pace for him to run into, we should be in good shape. I don’t think the distance will hurt us.”

Phlash Phelps won four straight races capped by the Find and Maryland Million Turf to end his 2015 campaign, and this year has sandwiched losses in the Henry Clark and Find around an optional claiming allowance victory May 20 at Pimlico. He hasn’t raced since the June 25 Find, where he bobbled at the start and forced to steady but rallied to be third by a half-length.

Top of Mind takes a two-race win streak into the Turf Cup, both since being moved to grass by Jenkins. He was an easy three-length winner of a 1 1/16-mile claiming event June 5 at Pimlico, and came back with a steady driving effort at the distance to get up by a nose in an optional claiming allowance July 1 at Laurel, his most recent start.

“He was running well enough on the dirt that I just never gave [the turf] a second thought. Then he kind of ran a so-so couple of starts and I said, ‘Let’s try him on the turf.’ It looks like it turned him around and he liked it,” Jenkins said. “The horse is doing real good. He’s training well and he’s feeling good. Whether he’s good enough or not, it’s going to be a tough race so we’ll see. I don’t know if he’s good enough, but you’ve got to give them a shot when they’re doing good.”

Merriebelle Stable’s multiple graded stakes winner Reporting Star, trained by Elizabeth Voss, is the 122-pound highweight in the Turf Cup. The Appleton was the lone win in five starts this year for the 6-year-old gelding, coming off a sixth-place finish in the Bernard Baruch. He will be making his debut on the Laurel turf.

Rounding out the field are Black Type, winner of the July 31 Oceanport (G3); Grade 2-placed El Jefe Grande and Mister Brightside, the latter fourth by two lengths in the Laurel Dash Sept. 10 in his 4-year-old debut; stakes winners Flatlined and Macagone; Heiko, who capped a three-race win streak by setting the Bowl Game Turf Course record for 1 1/16 miles (1:40.47) July 24 at Laurel; and March, Grade 1-placed on turf and a multiple graded-stakes winner on dirt last year making his second start of 2016.