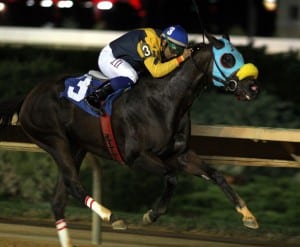 The claimbox is a popular way to buy and sell horses. Photo by Laurie Asseo.

Eighty horses changed hands via the claimbox from June 12 to June 19 in the region with a gross value of $903,000.  The numbers combine data from Monmouth, Parx, Penn National, Delaware, Charles Town, and Colonial Downs.

Those numbers exceeded those from the prior week, June 4 through June 11, when 76 horses, with a combined value of $779,000, changed hands.

Sixty-four different trainers grabbed at least one horse.  Marcos Zulueta led the way in dollar terms, having taken two horses with a combined value of $50,000.  Jorge Navarro claimed four horses to lead all trainers, with John Locke and King Leatherbury having taken three each.