A year ago, the Federico Tesio Stakes, long a staple of the Pimlico racing scene, disappeared.  In its place, under essentially similar conditions (a route race for three year-olds), came the Canonero II Stakes.

This year, the Tesio returns and now both races grace the local calendar.  Tomorrow’s Tesio, named for the legendary Italian breeder, has drawn 10 entries.

For most of its 30-plus year existence, the race has been — as it is now — ungraded.  Yet it’s had something of an outsized impact on the middle jewel of the Triple Crown, for which it is the local prep.  Deputed Testamony, the last Maryland-bred to win the Susies, prepped for the Preakness by defeating Dixieland Band in the Tesio.

Though Deputed is the only Tesio winner to follow that with a Preakness triumph, several other horses have used a good effort in this race as a springboard to a better one on the third Saturday in May.  Magic Weisner, in 2002, finished second in the Tesio and then nearly stole the Preakness at monster odds, his late rally falling less than a length short in second.  In 1995 Oliver’s Twist, after winning the Tesio, finished a game second in the Preakness.  And 2008 winner Icabad Crane and 1986 champ Broad Brush both finished in the money at the Preakness.

In addition to the $75,000 Tesio, Pimlico will also feature the $50,000 Shine Again Stakes for Maryland-bred fillies and mares. 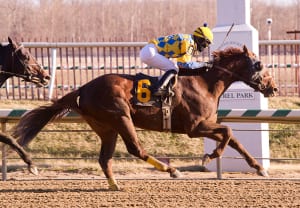 Pimlico handicapper Frank Carulli has tabbed Abstraction, who broke his maiden at Fair Grounds March 13, as his 7-5 morning line choice in the Tesio. Trainer David Carroll has worked his charge three times at Churchill Downs in anticipation of this start. Leandro Goncalves has the riding assignment on the son of Pulpit, who is not one of the four Triple Crown nominated runners in the race.

Laurel Park-based Dynamic Strike (4-1) is Triple Crown nominated. The Dickie Small trainee won the Miracle Wood Stakes at Laurel Park in February, one of three victories for the son of Smart Strike. Forest Boyce has been aboard for each start.

“I was disappointed with his first race around two turns (Private Terms Stakes last month),” Boyce said. “He is one of those horses where you are going to see a different horse next year. For as much as he has done already, he has a lot to learn. I am actually interested in seeing him on the turf.”

Former Maryland riding star Edgar Prado is named to pilot Heat Press (8-1), a Graham Motion trainee. The Malibu Moon colt broke his maiden at Laurel Park in December and won an entry level allowance start at Parx Racing last time out. Earlier this week, owner Kevin Plank of Sagamore Farm indicated he would like to see Heat Press compete in the Preakness if all goes well in the Tesio. The stable was represented by Tiger Walk a year ago.

Rienzi (8-1) moved from the Chad Brown barn to John Servis’ stable after returning from Florida and won an entry level allowance at Parx Racing in April. He posted a bullet workout there on April 22 and is scheduled to carry Kendrick Carmouche on Saturday.

The Shine Again is limited to runners seeking their first stakes win and has attracted eight fillies and mares. The morning line favorite is Touch the Birds (2-1), who finished third in this race last year and added in the money finishes to her stakes resume this year, with a second in the Nellie Morse and a third in the Maryland Racing Media Stakes. Boyce rides the Dance With Ravens mare for Carlos Mancilla. Mancilla is filling in for regular trainer Chris Grove, who is currently suspended.

“I love her,” added Boyce. “I actually rode her first time out for Dickie (trainer Dickie Small) and won but Chris claimed her. I was trying to get back on her but Chris was using a different rider. It has been a fortunate turn of events that I have been able to regain the mount the last three starts and it is cool to see how she has matured.”

Mancilla will also saddle Celtic Katie (5-2), who will be making her stakes debut. The daughter of Posse comes into the Shine Again off a romping victory over entry level allowance runners at Laurel Park in late March. Julian Pimentel has the mount.

Daydreamin Gracie’s (7-2) best stakes effort was a third place finish in the All Brandy at Laurel last fall. She has won eight of 24 starts for Dane Kobiskie, including an allowance score last week. Joshua Navarro will ride.

In addition to the 11-races Saturday afternoon, items from Preakness and Pimlico past will be awarded as part of a Piece of the Past promotion giveaway available at the Grandstand entrance.  All fans will receive a chit that can be exchanged for a pair of vintage Preakness glasses plus one other choice. Fans can choose from Preakness t-shirts, Pimlico caps and much more through the last live race.